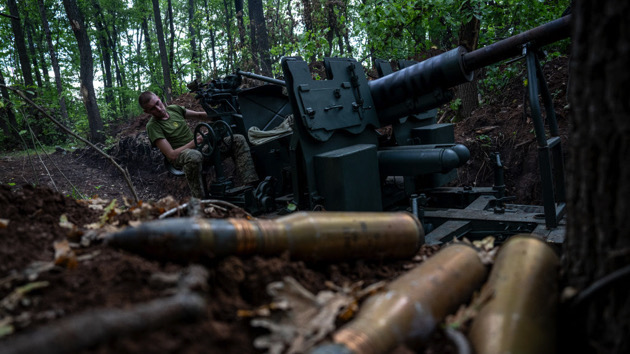 Jul 29, 8:28 AM EDT
US ambassador to Ukraine speaks to ABC News as grain ships prepare to leave

U.S. Ambassador to Ukraine Bridget Brink told ABC News on Friday morning that she is “optimistic” ships carrying grain will begin leaving Ukraine this weekend, but that it’s up to Russia to keep its side of the deal.

During an interview in the Ukrainian port city of Odesa, Brink told ABC News there is currently “no obstacle” to the ships’ departure.

“Ukraine is ready to ship this grain, but it’s also up to Russia to agree on the grain corridor and the ships will be ready to go,” Brink said. “It can be done, it should be done and, in fact, it must be done.”

She declined to say whether the United States would impose consequences on Russia if it disrupted the United Nations-brokered deal or attacked the ships. But she underlined her country’s support for Ukraine and the deal, saying it was important that Ukrainian grain starts reaching countries that need it.

“Twenty-four hours after the deal was agreed a week ago today, Russia bombed this very port where we’re standing,” Brink noted. “So I think it’s imperative on Russia to live up to its commitments and to implement the agreement it signed onto, and imperative on all of us to ensure that Russia lives up to those commitments.”

When asked if there was a “Plan B” if the deal failed, Brink said the focus was on doing everything to ensure “Plan A” works.

Earlier Friday, Brink and ambassadors of other G-7 countries held a press conference in Odesa while overseeing the preparations. She told reporters that she hopes an agreement confirming the safe corridors of the grain ships to sail through this weekend would be reached. Under the deal, Ukraine and Russia have been negotiating the precise routes the vessels will take across the Black Sea.

Since Russian forces invaded neighboring Ukraine on Feb. 24, the cost of grain has skyrocketed worldwide. Russia and Ukraine — often referred to collectively as Europe’s breadbasket — produce a third of the global supply of wheat and barley, but Kyiv has been unable to ship exports due to Moscow’s offensive. Last month, the Ukrainian Grain Association warned that Ukraine’s wheat harvest is expected to plummet by 40%.

In recent weeks, there has been an all-out push from the U.S. and the U.N. to facilitate exports from war-torn Ukraine, desperate to offset what they foretell is a looming global food crisis with the potential to devastate the developing world. A Russian blockade in the Black Sea, along with Ukrainian naval mines, have made exporting siloed grain and other foodstuffs virtually impossible and, as a result, millions of people around the world — particularly in Africa and the Middle East — are now on the brink of famine.

Ukraine announced Friday that it hopes the first ships carrying grain will finally be leaving two ports this weekend under a United Nations-brokered deal to end Russia’s blockade.

The departure of the first ships will be a major test of whether the deal with Moscow will hold and Ukrainian food can begin to ease the global hunger crisis worsened by the blockade amid Russia’s war.

Ukrainian Minister of Infrastructure Oleksander Kubrakov, who is overseeing the operation, told reporters in Odesa on Friday morning that the port as well as the nearby Chernomorsk port are prepared to begin, with 17 ships already loaded with grain.

A final agreement mediated by the U.N. and Turkey needs to be signed off on the routes the vessels will take out of the heavily mined ports. Kubrakov said Ukraine had provided a number of options and that, from its side, the country is ready. Ukraine is waiting for the U.N. to confirm the routes are accepted by both sides.

Kubrakov said the first ships should leave by the end of the weekend.

Ukrainian President Volodymyr Zelenskyy was also in Odesa on Friday morning to see the preparations and meet with Kubrakov as well as other officials, including U.S. Ambassador to Ukraine Bridget Brink.