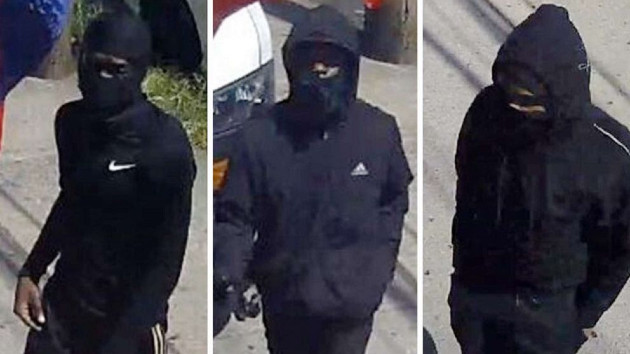 (NEW YORK) — Police released footage of three suspects wanted in connection with the armed robbery of a Brooklyn, New York bishop during a livestream of his service.

Bishop Lamor Whitehead said he and his wife were robbed of “hundreds of thousands” in jewelry, including his wedding band, during a targeted incident on Sunday at his church, Leaders of Tomorrow International Ministry.

The New York Police Department released surveillance footage late Tuesday that shows the suspects, dressed in all black and wearing masks, crossing the street and entering the location shortly after 11 a.m. Sunday. Police said Wednesday there were no updates in the case.

Footage of the livestream, which is also part of the police investigation, shows the bishop saying “alright, alright” and lowering himself to the ground as one of the masked men enters the frame.

“When I see them come into the sanctuary with their guns, I told everybody, ‘Get down,'” Whitehead said in a video posted on Instagram. “I didn’t know if they wanted to shoot my church up or if they were coming for a robbery.”

Police said the men displayed firearms and stole a “large sum of jewelry” before fleeing in a white Mercedes.

Whitehead said that he chased after the suspects, whom he said had changed clothes and took their masks off, but ended up driving past them.

The bishop said the ministry was “traumatized” by the incident, and that a gun was pointed in the face of his 8-month-old baby. He has since offered a $50,000 reward for information leading to the “healthy” arrest of the three men.

“I don’t want nothing happening to these young men,” he said in a video posted on Instagram announcing the reward. “I want the law to deal with these people.”

He decried the robbery, saying that he would have helped the men if they needed it.

“I would have been able to show love,” he said.

Following news of the robbery, Whitehead has also defended himself against criticism over his “flashy” lifestyle.

“It’s not about me being flashy,” he said. “It’s about me purchasing what I want to purchase.”