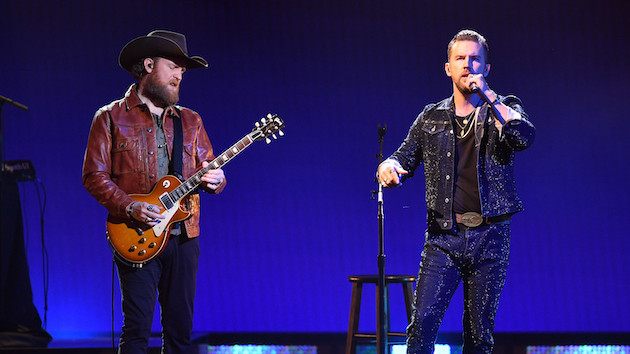 If you’re wondering what to expect from Brothers Osborne’s performance on the CMA Fest TV special, the bandmates have a little hint to share.

“We were allowed to bring a prop from our live shows. Actually, two props,” says one-half of the band, John Osborne. “Without giving anything away — keep your eyes peeled for that. Props. Yeah.”

The special will feature the brother duo playing “Skeletons,” the title track from their latest album, on the big stadium stage. For Brothers Osborne, taking the main stage for their performance is a reminder of how far they’ve come, especially compared to the CMA Fests they played at the outset of their career.

“We’ve been playing it for a long time,” says TJ Osborne. “We’ve played these small little stages, sometimes three or four of them in a single day…labels got to see us, publishers got to see us, and then [we got to] make some fans.”

It’s a lot of work to build a grassroots fanbase like that, but the Brothers wouldn’t have it any other way. “Now to be here, playing the stadium, it really is like a snapshot — these different stages we would play and grow in,” TJ continues.

“It really puts into perspective, you know, what hard work can do,” he adds, “but also having these opportunities, how incredibly helpful they are.”

The CMA Fest special was filmed during the annual festival in downtown Nashville in June. Dierks Bentley and Elle King are hosting the show, which airs on August 3 at 8 p.m. ET on ABC. It will also be available to watch on Hulu the next day.