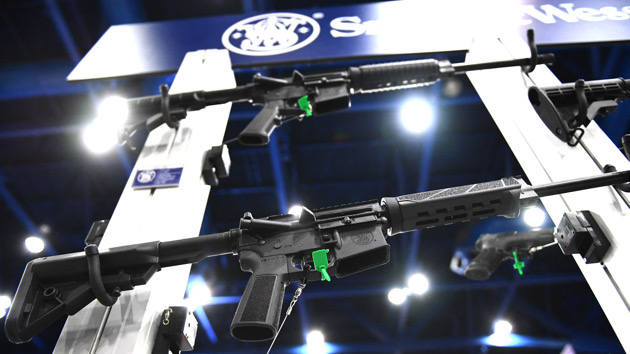 (WASHINGTON) — Leading gun manufacturing executives testified Wednesday morning before a House panel investigating the role of the firearms industry in the nation’s high rates of gun violence, maintaining that Americans — not firearms — cause mass shootings.

The hearing, beginning at 10 a.m. ET and helmed by House Oversight Committee Chairwoman Carolyn Maloney, a New York Democrat, featured two top CEOs ahead of the consideration of legislation that would target the sale of semiautomatic weapons, a move that many gun rights supporters and Republicans oppose as unconstitutional.

Marty Daniel, CEO of Daniel Defense, said that he was at the hearing voluntarily but was “concerned” that the implied purpose of the hearing was to vilify and blame rifles for recent deadly shootings in Uvalde, Texas; Highland Park, Illinois; and Buffalo, New York, among others.

Two months ago, the Uvalde gunman used a Daniel Defense weapon to kill 19 students and two teachers at an elementary school.

Rep. Maloney asked Daniel if he had responsibility for the Texas shooting.

“Many Americans, myself included, have witnessed an erosion of personal responsibility in our country and in our culture. Mass shootings are all but what unheard of just a few decades ago,” Daniel said. “So what changed? Not the firearms. They are substantially the same as those manufactured over 100 years ago. I believe our nation’s response needs to focus not on the type of gun but on the type of persons who are likely to commit mass shootings.”

Maloney spoke with ABC News on Tuesday about the context of the hearing. She said it should be a “wakeup call” for Congress to act on gun reform “to hold these gun manufacturers accountable for the deadly weapons that they’re manufacturing that are killing innocent Americans.”

Daniel and Christopher Killroy, president and CEO of Sturm, Ruger & Company, Inc., were confirmed witnesses ahead of the hearing.

Maloney told ABC News that a representative for a third gun manufacturer, President Mark P. Smith of Smith & Wesson Brands, Inc., was invited to the hearing. Smith is not confirmed to attend.

“I would say, ‘We have invited three manufacturers — CEOs — [and] two have accepted,'” Maloney said.

“One is dodging us and not responding to our requests for documents,” she contended. “And we intend to hold them accountable eventually in some form.”

The oversight committee sent letters on May 26 to Smith & Wesson, Daniel Defense and Sturm, among others, following mass shootings in Buffalo, New York, and Uvalde, Texas.

The letters sought further information on the companies’ sale and marketing of assault-style semiautomatic rifles and similar firearms, “including revenue and profit information, internal data on deaths or injuries caused by firearms they manufacture, and marketing and promotional materials.”

On July 7, following the Fourth of July shooting in Highland Park, Illinois, Maloney sent additional letters to the CEOs of the three top gun manufacturers, requesting their appearance at Wednesday’s hearing.

Maloney’s request for the hearing with gun executives came ahead of the committee’s June 8 hearing with Uvalde and Buffalo survivors and victims’ relatives.

President Joe Biden a month ago signed into law a bipartisan gun safety package, which did not include the weapons ban he sought. House Democrats are pushing for more reforms.

Maloney told ABC News that she believed the additional legislation “will make America safer for our citizens.”