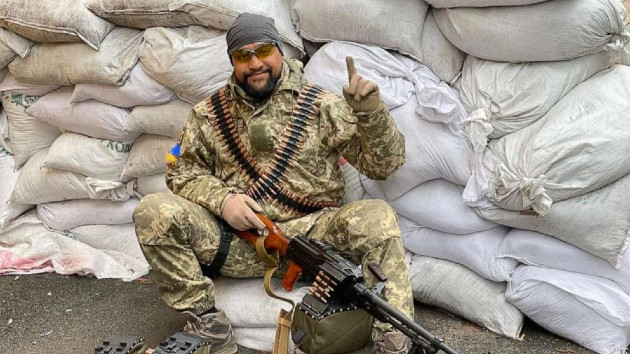 (KYIV, Ukraine) — Jalal Noory, an Afghan refugee in Ukraine who serves in the Ukrainian armed forces, defended the Ukrainian capital of Kyiv from being captured by Russian troops at the onset of Russia’s full-scale invasion of Ukraine earlier this year. Noory and his fellow soldiers succeeded, repelling all Russian attacks on the capital.

A Ukrainian citizen since 2005, Noory first went to the frontline in 2014 as a volunteer following Russia’s invasion of Crimea and the Donbas region. Noory said he was called to the front by a sense of patriotism.

“I simply could not stay away,” he added.

“I wanted to share my combat experience with my Ukrainian comrades,” Noory said, adding that “war is part of every Afghan’s nature.”

Noory was born in Afghanistan in the mid 1970s. He still recalls the Soviet invasion of his native country in 1979.

“I remember the Soviet army crossing through my city when I was a child. We bought cigarettes and gave them to the Soviet soldiers. They gave us bullets in return to play with,” Noory said.

The conflict morphed into a full-scale war that lasted 10 years and cost the Soviets around 15,000 troops, according to official estimates. More than 3,000 men lost in the war were from Ukraine.

Up to two million Afghan civilians died in the fighting — or about 10% of Afghanistan’s population in 1979. Millions of others became refugees, including Noory.

Russian military tactics witnessed today in Ukraine are identical to those used in Afghanistan, Noory said.

“At the time, the Russians claimed their Afghan friends were calling for help. Just like now in Ukraine,” he said.

Russia invaded Ukraine in February this year under the pretext of protecting the Russian speaking population in the country, among other justifications proclaimed by Russian officials as the invasion unfolded.

“But it’s a lie. I’ve lived in Ukraine for 23 years and I’ve only spoken Russian. I never had a problem with the language,” Noory said.

Frightening and terrorizing the civilian population is another staple of Russian warfare that stood the test of time, according to Noory.

“Absolutely nothing has changed. They are hiding behind women, children, houses, and villages. They destroy them by rockets, bombs and tanks,” he said.

Noory, having grown up in the middle of a war, absorbed military knowledge from his early childhood. But after fleeing to Ukraine in 1999, he led a peaceful life.

Noory became a successful athlete, winning several titles in martial arts competitions. He also got married and had children.

Yet he did not hesitate for a second when Russia invaded Ukraine both in 2014 and this year.

“Someone must stop the Russians. Now it is the Ukrainians, but Poland or Lithuania could be next,” Noory said.

Noory said he did not only fight for his life, family, friends, or Ukraine. He’s protecting something much bigger, he added.

The most important thing in life is freedom, Noory said.

“If you don’t have freedom, you have nothing. So I must be free and my children have to be free,” he said.