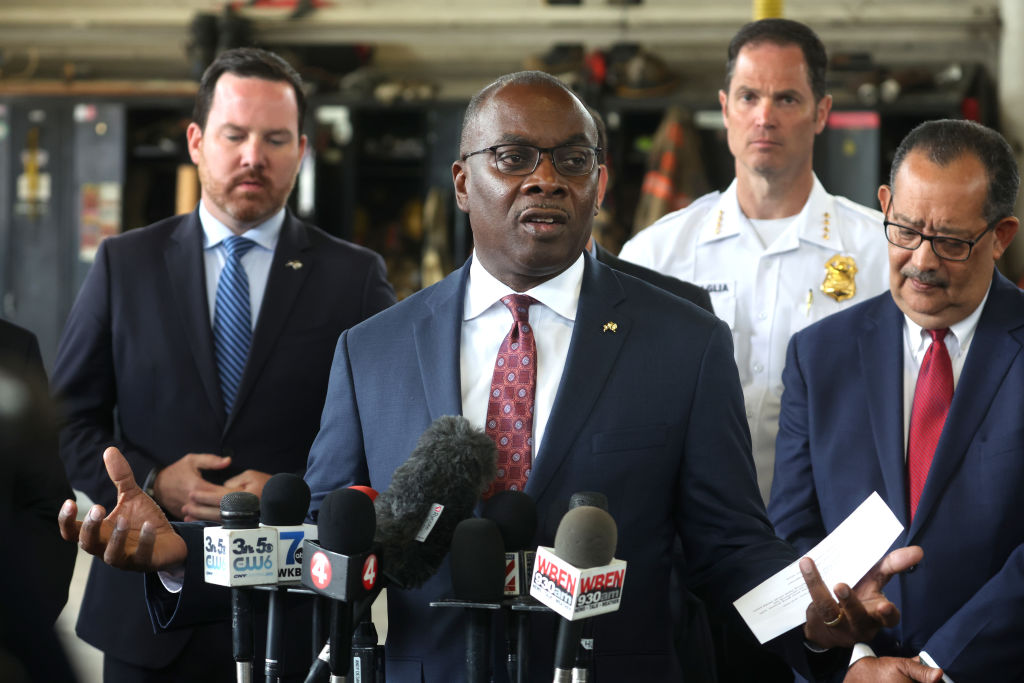 (WASHINGTON) — At a House subcommittee hearing last week on the economic impact of mass shootings on local communities, Mayor of Buffalo, New York, Byron Brown, testified about the aftermath of the shooting at a supermarket in May that killed 10 people and left three injured.

Since the shooting, the city has spent more than $500,000 on “police, fire, sanitation [and] other municipal services,” Brown told ABC News, in addition to the financial impact on businesses, families of the victims and survivors, and other unexpected costs. Last month, New York Gov. Kathy Hochul announced a $50 million investment earmarked for East Buffalo, where the shooting occurred.

Brown spoke with ABC News about the emotional and financial impact of the shooting in Buffalo, which he says has not received any federal support yet, the reopening of Tops supermarket and how the community has responded in the wake of what law enforcement authorities called racially-motivated violence.

GMA3: Welcome back to GMA3, everybody. Buffalo, New York, Texas, an elementary school there, a Fourth of July parade in Illinois. You know what I’m talking about here. We’re talking about the series of mass shootings we’ve seen. They continue, it seems, in this country, and it profoundly affects the communities in which they occur. And last week, a congressional subcommittee hearing addressed not only the devastating loss of life from these events, but the long-term economic impact these communities often suffer. Want to bring in now somebody who testified at the hearing, Buffalo, New York, Mayor Byron Brown. Mr. Mayor, thank you so much for being here. And I know that some numbers we can get into, statistics and whatnot, but I just want to start with you speaking from the heart for a second. Just how is your community doing?

BROWN: You know, it has been very painful for our community. People are in trauma. We are healing, wrapping our arms around each other and doing everything that we can to get through this most painful time in our community.

GMA3: Mr. Mayor, can you tell me, I saw that you spent almost half a million dollars that you didn’t expect to spend in the immediate weeks after the shooting. That just has to do with vital services that were needed, overtime for many of your folks in the community, your police officers, your fire department. Are you getting what you need? I know the federal government often promises and wants to be there to help, but are you getting those types of resources and financial resources that you need in your community right now?

BROWN: We’re having those conversations. We haven’t gotten any financial resources from the federal government at this point. I’ve sent the message that I believe strongly that communities that experienced mass shootings there should be federal financial support; in this case an act of domestic terrorism fueled by racism and white supremacy. The impact has been very devastating to this community financially. May 14, when the shooting occurred and in the two weeks thereafter, the city spent over half a million dollars – police, fire, sanitation, other municipal services. And that price tag has continued to grow ever since.

And so the economic impact is a significant one, not only on the municipality un-budgeted costs, but on the families, on the survivors, on the surrounding community, and on businesses in the community around the Tops supermarket.

GMA3: Mr. Mayor, have you gotten a commitment that that money is coming?

BROWN: The federal government has been very responsive. President Biden has been here in Buffalo. Vice President Harris has been here. The Attorney General, Merrick Garland, has been to Buffalo. We’ve had several meetings in Washington.

And it is my hope that the federal government will step up, will see the pressing need in this community and financially will support the needs of residents, families of victims, survivors of the shooting and the city itself.

GMA3: We talked about [the fact] that the Tops grocery store, the supermarket, was such a vital part of the community. It was one of a few grocery stores that serve so many people in that area. And the subcommittee did hear testimony about property values going down and business activity going down in cities in areas where there have been mass shootings. How has that community begun to recover in that aspect? Is it back to being a place that is bustling? I know the supermarket has reopened.

Obviously, some people [feel] uncomfortable to come back to that location because of the horrible tragedy. Ten people killed, three wounded. We’ve partnered with a company called Instacart to expand at-home delivery from the supermarket and to expand grocery pick-up at the supermarket. So we are doing everything that we can to not let those alarming statistics of the horrible impacts of mass shootings take hold in the Buffalo community.

As I said, people are rallying around each other. There have been food distributions, concerts, marches, rallies, everything that we can think of to keep the community together and send a message to the nation and to the world that evil will not win, that hate will not win, and that white supremacy will not win.

GMA3: Mr. Mayor, you said two things there that jumped out at me. Keep the community together, and they’ve been rallying around each other. But how can you take this moment and again, when you talk about unity in moments like this, I know you’re tired of hearing it, but Buffalo has historically been for a long time one of the most racially segregated cities in this country. And there are brown and Black communities there that have long suffered. How can you take this moment now and do something? And how can you do something to bridge that divide and division in your community? Because a lot will argue that your community was targeted in the first place because of that segregation. The shooter actually looked up a place where there was a high percentage of African-Americans. It ended up in your community.

BROWN: The shooter attacked Black Buffalo. But many people that we’ve heard from all across the country feel like this was an attack on Black America because the goal of this racist white supremacist shooter was to kill as many Black people as possible. And so this could have occurred anywhere in the country, anywhere in the state where there was a high concentration of Black people.

Gov. Kathy Hochul has already committed over $50 million to East Buffalo. And so we will use those resources and work with the community to invest heavily to make this community better, stronger and more united than it has been previously.