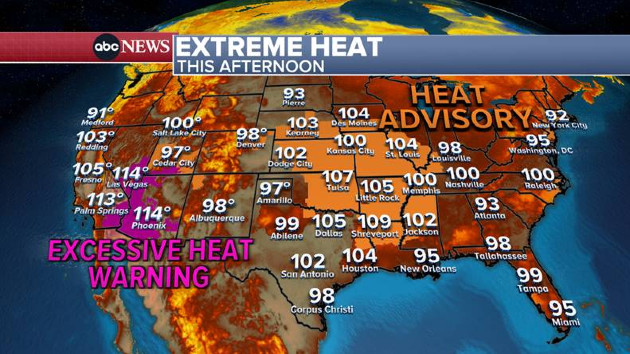 (NEW YORK) — More than 82 million Americans from California to New Hampshire are on alert for extreme heat Friday as the nation’s deadly, unwavering heat wave pushes on.

In the Northeast, heat advisories have been issued from Delaware to New Hampshire — and the heat is expected to intensify this weekend.

Record-high temperatures are forecast for Sunday from Philadelphia to New York City to Boston.

New York City’s Triathlon and Duathlon is shortening the run and bike portions of Sunday’s race due to the dangerous heat.

In Boston, a heat emergency has been extended through Sunday. The city said cooling centers will be open and more than 50 splash pads are available.

The heat wave is also persisting in the South and the West.

Dallas County reported its first heat-related death of the year on Thursday. The county’s Department of Health and Human Services said the victim was a 66-year-old Dallas woman with underlying health conditions.