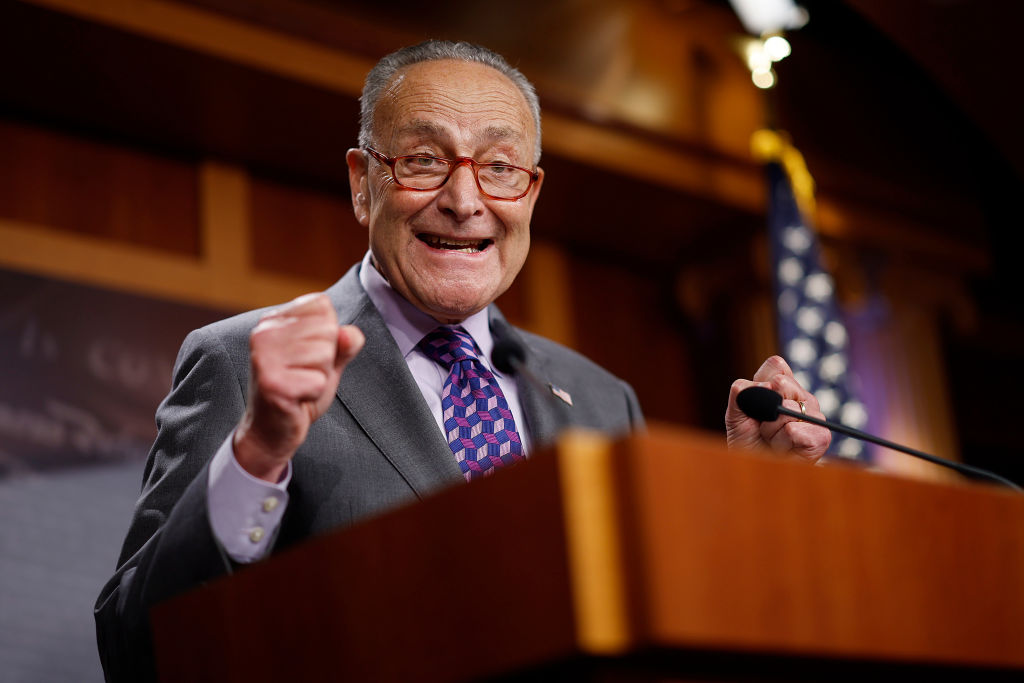 (WASHINGTON) — Senate Majority Leader Chuck Schumer said Wednesday he would like to see the upper chamber now vote on legislation to codify the right to same-sex and interracial marriage after 47 Republicans joined Democrats in the House in approving the measure on Tuesday night.

Schumer said during a floor speech that he was “really impressed by how much bipartisan support it got in the House.” He added: “I want to bring this bill to the floor. And we’re working to get the necessary Senate Republican support to ensure it would pass.”

President Joe Biden also wants the Senate to take up the measure quickly, with his aides saying senators should “act swiftly” in sending the bill to him for his signature.

“We need this legislation, and we urge Congress to move as quickly as possible,” White House press secretary Karine Jean-Pierre said aboard Air Force One on Wednesday. “It’s something the vast majority of the country support, just like they support restoring Roe [v. Wade], stopping a national abortion ban and protecting the right to use contraception.”

Calls for swiftly bringing the legislation to the floor come amid some concern that the Senate’s legislative calendar is too full to take up the bill before a month-long recess that begins on Aug. 5.

“We have more priorities than we have time,” Sen. Dick Durbin, the Democratic whip, said on Tuesday.

Schumer needs at least 10 Republicans to join the 50 members of the Democratic caucus and avoid a filibuster of a vote. Conservative Democrat Joe Manchin of West Virginia told reporters on Wednesday that he did not have a problem with the measure but needed to see the fine print in the bill, according to a spokeswoman.

Bill co-sponsor Sen. Rob Portman, R-Ohio, said there was “a possibility” that 10 Republicans would vote for it, though the extent of Senate GOP support is currently unclear. In the House, 77% of Republicans rejected the measure, including leadership.

“I think that’s obvious,” Portman said Wednesday when asked if Republican views on same-sex marriage were shifting. His own position changed in 2013 when he revealed that his son is gay.

While some congressional Republicans have argued the bill over-states the danger to national marriage rights and is being used as political tool, Portman said the bill sends an important message even if it fails to gain the necessary support.

Senate Republican whip John Thune told reporters that he “would not be surprised” if enough of his conference supported the proposal, adding that he likely would not push his members to oppose it. But the conservative from South Dakota said the matter was nothing more than a political distraction.

“I don’t think it’s an issue right now that anybody’s talking about,” Thune said. “I think this is an issue that Democrats have concocted because they like to shift the subject from inflation and gas prices and the [southern] border and other issues.”

After expressing reservations about the bill to ABC News on Tuesday, Sen. Thom Tillis, R-NC, told reporters on Wednesday he was “looking at the bill and probably will” support it.

GOP Sens. Chuck Grassley of Iowa and Ted Cruz of Texas ignored reporter questions about how they may vote.

Known as the Respect for Marriage Act, the same-sex and interracial marriage legislation comes as the House takes up a series of bills that seek to codify unenumerated constitutional rights extended by the Supreme Court, including the right to same-sex marriage and access to contraception for married couples.

Abortion access was another such right until the high court reversed Roe last month.

Conservative Justice Clarence Thomas wrote in his concurrence in that case that the court should next reverse its ruling on same-sex marriage and contraception access.

This week, the House is also set to vote on a bill that would protect access to contraception after it approved legislation last week to codify a women’s right to an abortion. The fate of those bills in the Senate is not clear.