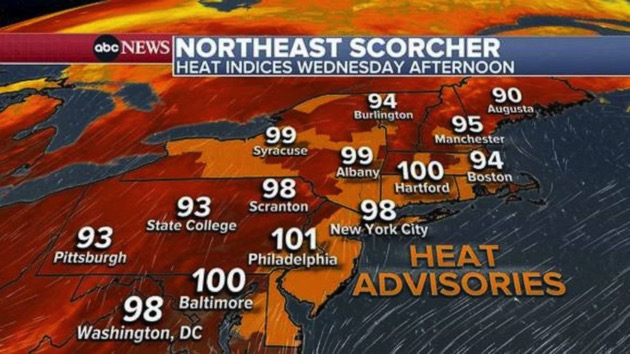 (NEW YORK) — A dangerous heat wave is stretching across much of the U.S. with temperatures in the triple digits from the West to the South to the East as sweltering, unrelenting heat continues to slam Europe.

Here’s what to expect Wednesday:

Excessive heat warnings stretch from San Antonio to Tulsa to Memphis, where it’ll feel like 105 to 115 degrees.

Heat advisories extend from Cincinnati, Ohio, to the Mexican border, with the heat feeling like over 100 degrees for this wide swath of the central U.S.

The heat index — what temperature it feels like with humidity — is forecast to skyrocket to a dangerous 108 degrees in Houston, 113 in Dallas and 112 in Little Rock and Memphis.

Houston, Dallas, Austin and San Antonio may reach record highs. The intense heat is also continuing to create a breeding ground for fires in Texas.

In the Northeast, heat advisories stretch from Maryland to northern Vermont.

The heat index is forecast to jump Wednesday to 101 degrees in Philadelphia and 98 degrees in New York City and Washington, D.C.

The heat wave in the Northeast is expected to last through the weekend and may linger into next week.

Meanwhile, in the West, temperatures are expected to climb to 112 in Palm Springs and 113 in Las Vegas.

And in Europe, the United Kingdom on Tuesday reached its highest temperature ever, breaking 40 degrees Celsius for the first time as U.K. officials declared a national emergency and issued unprecedented health warnings.

But the heat Wednesday turns to Spain, Italy and Germany.

Click here for tips to stay safe in the heat.