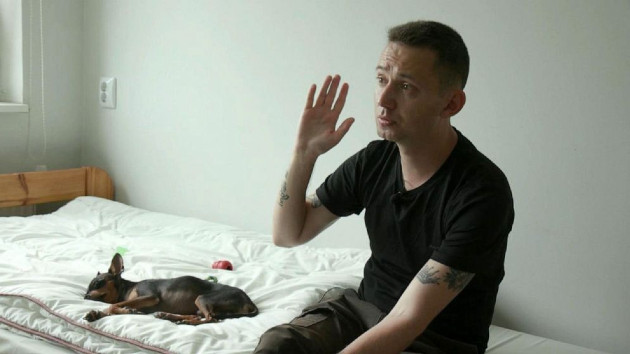 (NEW YORK) — Eduard Mkrtchian, injured during Russian shelling of the Ukrainian city of Mariupol, said he was forced to evacuate and, at a Russian-controlled checkpoint, said he was given false information and forced to travel into Russia.

He told officials he wanted to go to western Ukraine, to a city called Zaporizhzhia, but was told “there’s no Zaporizhzhia anymore,” he said in an interview with ABC News’ Ines de La Cuetara.

Instead, he was brought to a so-called “filtration camp,” a checkpoint in Russian-controlled areas of Ukraine where reports have emerged of people being interrogated for hours, their biometric data being recorded and their photos on their phones wiped.

He said he was repeatedly misled, and brought deeper and deeper into Russia.

“I was deceivingly taken to Russia,” he told ABC News.

The U.S. Department of State estimates that between 900,000 and 1.6 million Ukrainian citizens, including 260,000 children, have been “interrogated, detained, and forcibly deported” to Russia, adding that “the unlawful transfer and deportation of protected persons is a grave breach of the Fourth Geneva Convention on the protection of civilians and is a war crime.”

There are at least 18 “filtration camps” that have been set-up along the Russia-Ukraine border, according to Michael Carpenter, the U.S. ambassador to the Organization for Security and Cooperation in Europe.

During his interrogation, Mkrtchian says, “they asked me to undress. They asked me the meaning of every tattoo on my body.”

“They deliberated a long time whether or not to let me go. I realized that they could kill me here,” he said.

“You have to fill out a form. There are different questions. For example – do you have relatives in the armed forces of Ukraine, do you know about the location of Ukrainian military bases, and so on,” said Mariupol resident Ruslan Bojko, who says he spent four days at a “filtration camp.”

“These people don’t have a choice, they have to comply,” Tanya Lokshina, Europe and Central Asia associate director for Human Rights Watch, told ABC News. “The de facto choice, the only option that they have, is to remain in the streets and die under shelling.”

According to a statement released on Wednesday by the U.S. Department of State, “evidence is mounting that Russian authorities are also reportedly detaining or disappearing thousands of Ukrainian civilians who do not pass ‘filtration.’”

“There are very strong grounds to believe that those individuals detained by them experience ill treatment and even torture,” said Lokshina.

“The woman who was sitting next to me in the filtration camp, her husband had been gone for two weeks. He was taken away for filtration and not returned. There were at least 10 women I spoke with who had similar stories,” said Mkrtchian.

Russia has acknowledged that it is resettling Ukrainian refugees, yet claims it is for “humanitarian” reasons.

After spending time in a refugee camp in Russia, Mkrtchian eventually traveled across Russia to Estonia where he now lives, awaiting the opportunity to return to Ukraine.

“How can I stay in a country that destroyed my life?” he said.