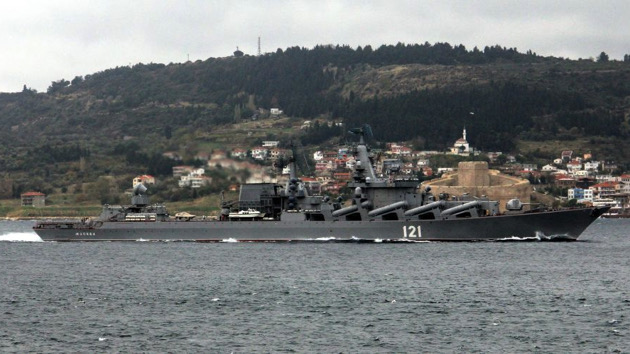 Ukrainian presidential adviser Oleksiy Arestovych and Anton Gerashchenko, an adviser to Ukraine’s Ministry of Internal Affairs, said there was an explosion and that the cruiser is on fire.

Russia said the ship was seriously damaged, but did not confirm that was due to Ukrainian strikes. Russia claimed there was a fire abroad the ship that forced all 510 members of the crew to evacuate.

“As a result of a fire, ammunition has detonated on the Moskva missile cruiser. The ship was seriously damaged. The crew was completely evacuated,” the Russian Defense Ministry said in a statement.

“The cause of the fire is under investigation,” the statement said.

Russia later said the fire aboard the ship was contained and that the Moskva will be towed to a port. Russia’s Defense Ministry said the main missile weapons on board were not damaged, but made no mention of missile strikes in its statement.

A senior U.S. defense official told reporters the U.S. assesses that the crew of the Moskva is still battling a fire aboard the ship.

About a half-dozen other ships that had been close to the Moskva have now moved further away from the coast into the Black Sea, the official also said.

In an interview on MSNBC Thursday, Pentagon spokesman John Kirby said there wasn’t enough information to determine if the explosion was in fact caused by a Ukrainian missile strike, though it can’t be ruled out.

Despite the Russian Defense Ministry claiming the ship was being towed, Kirby said it was under its own power and looked to be headed east toward Sevastopol in Crimea.

“She was operating about 60 miles or so south of Odessa and we know she suffered an explosion,” Kirby said on MSNBC.  “It looks like from the images that we’ve been able to look at it looks like there’s a pretty sizable explosion too.”

On CNN, Kirby said the U.S. is unaware what caused at least one explosion abroad the ship, describing the explosion as “a fairly major one at that, that has caused extensive damage to the ship.”