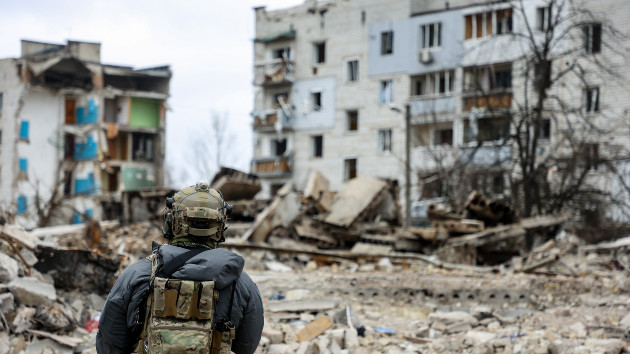 President Joe Biden confirmed Thursday that the White House is planning to send a senior official to visit Ukraine.

Before boarding Air Force One to fly to North Carolina, Biden was pressed for details by reporters but declined to elaborate.

When a reporter asked who the White House will send to Ukraine, Biden quipped, “Ready to go?”

“Are you?” the reporter asked.

“Where our focus will be over the course of the coming days is on evasion,” Sullivan said Thursday at the Economic Club of Washington. “As Russia tries to adjust to the fact that it’s under this massive economic pressure, what steps do they take to try to evade our sanctions and how do we crack down on that? And I think we’ll have some announcements in the next week or two that identify targets that are trying to facilitate that evasion both inside Russia and beyond.”

When Sullivan was asked whether sanctions will automatically be lifted if a negotiated peace deal between Russia and Ukraine is worked out, he appeared cautious with his words, saying, “a lot of that depends on what the shape and scope” of the agreement is.

But Sullivan said Russian oligarchs shouldn’t expect to ever get back their yachts and other assets seized under sanctions that have been imposed, saying the ultimate goal is “not to give them back” once the war is over.

“The president is actively looking at how we can deal with the fact that as we seize these assets, our goal is not to give them back. Our goal is to put them to a better use than that,” Sullivan said. “But I’ll be careful in what I say today because there’s an ongoing kind of policy process around how we end up dealing with that question. But, rest assured, that the goal is not just to sit on them for a while.”

Apr 14, 11:14 am
Putin claims Europe has no alternative for Russian energy resources

Russian President Vladimir Putin said Thursday that attempts by Western countries to exclude Russian energy suppliers will affect the global economy and that European Union countries have no alternative resources.

“Consequences of such a step can become quite painful, first of all, for initiators of such a policy,” Putin said during a meeting with top officials on the situation in the Russian oil and gas sector.

“What is surprising here: so-called partners from unfriendly countries assume that they can avoid Russian energy resources, including natural gas. Its reasonable replacement for Europe doesn’t exist. It is possible, but it doesn’t exist so far,” Putin said. “Everyone understands there is no free volume (of energy resources) on the world market.”

“EU countries talk of cutting off energy supplies from Russia, driving up prices and destabilizing the market,” Putin said.

Putin said that Russia should embark on building infrastructure for eastward oil and gas exports as the country needs to diversify its energy supplies away from Europe.

Thirty prisoners of war will be returned to Ukraine on Thursday as part of the latest exchange of captives with Russia, according to Ukrainian Deputy Prime Minister Iryna Vereshchuk.

Vereshchuk said in a statement via social media Thursday that, following an order from Ukrainian President Volodymyr Zelenskyy, five officers and 17 servicemen were exchanged, along with the release of eight civilians, including one woman.

“In total, 30 of our citizens are going home today,” Vereshchuk said.

Thursday’s prisoner swap marked the fourth to take place between the two countries since Russia launched an invasion of Ukraine on Feb. 24.

Apr 14, 10:01 am
9 humanitarian corridors to reopen in eastern Ukraine on Thursday

She said in a statement via social media Thursday that evacuation routes were agreed upon for those traveling by private cars from besieged Mariupol in the Donetsk Oblast, as well as from Berdyansk, Tokmak and Enerhodar in the Zaporizhzhia Oblast — all of which lead to the southeastern city of Zaporizhzhia.

Humanitarian corridors were not reopened the previous day because Russian forces had blocked evacuation buses in the Zaporizhzhia Oblast and violated the cease-fire in the Luhansk Oblast, according to Vereshchuk.

“All this creates such a level of danger on routes that we are forced to refrain from opening humanitarian corridors today,” she said in a statement via social media Wednesday.

Russian forces are likely to attack the towns of Kramatorsk and Kostiantynivka in eastern Ukraine, the U.K. Ministry of Defense warned in an intelligence update Thursday.

The towns are both located in the Donetsk Oblast of the disputed Donbas region, where Russian troops are “striking Ukrainian forces in preparation for a renewed offensive,” according to the ministry.

“Urban centres have faced repeated indiscriminate attacks from Russia throughout the conflict,” the ministry said. “The towns of Kramatorsk and Kostiantynivka are likely to be Russian targets for similar levels of violence.”

The railway station in Kramatorsk was the site of rocket attack that killed dozens of civilians trying to evacuate the region on April 8.

“The combination of widespread missile and artillery strikes and efforts to concentrate forces for an offensive represents a reversion to traditional Russian military doctrine,” the ministry added. “However, this will require significant force levels. Ukraine’s continued defence of Mariupol is currently tying down significant numbers of Russian troops and equipment.”

Mariupol, a strategic port city in the Donetsk Oblast, has been under heavy Russian bombardment since the start of the invasion on Feb. 24. Strong resistance from Ukrainian troops have prevented Russian forces from taking full control of Mariupol.

At least 197 children have been killed in Ukraine since the Russian invasion began, Ukraine’s Prosecutor General’s Office said on Thursday.

Another 351 children have been injured during the invasion, the office said. The actual number of casualties was assumed to be higher, because Ukraine’s official figures didn’t include “full consideration of places with active hostilities,” the office said.

Two children died after being hospitalized for injuries from a rocket attack on a train station in eastern Ukraine last Friday, according to Thursday’s update. Seven children have now died following that Russian attack, the update said.

Ukrainian presidential adviser Oleksiy Arestovych and Anton Gerashchenko, an adviser to Ukraine’s Ministry of Internal Affairs, reported there was an explosion and that the cruiser is on fire.

Russia’s Ministry of Defense said a fire onboard the Moskva caused a subsequent broadside munitions explosion.

“The ship received serious damage, the crew was evacuated,” the ministry said, adding that an investigation is underway.

There was no mention of a missile strike in the ministry’s statement, which was carried by Russia’s state-run news agency TASS.