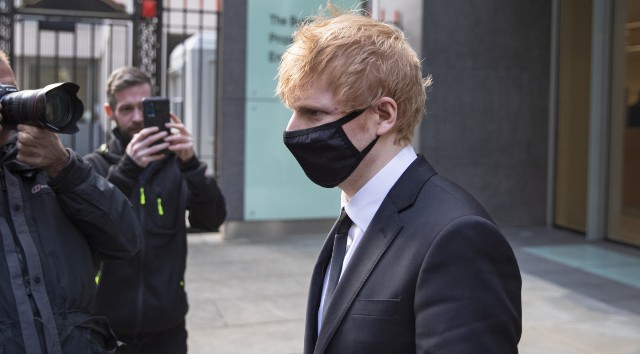 Ed Sheeran and his collaborators have won their copyright case over Ed’s smash hit, “Shape of You.”

As Music Week reports, the judge ruled that Ed, Johnny McDaid and Steve Mac did not plagiarize the song “Oh Why,” by Sami Chokri, who records under the name Sami Switch, while writing their number-one hit.  Following an 11-day trial, Judge Antony Zacaroli ruled that Sheeran had “neither deliberately nor subconsciously copied” Chokri’s song.

Zacaroli added that any similarities between the two were “only a starting point for a possible infringement” of copyright. Ed told the court that he’d never heard “Oh Well” until the trial.

According to Music Week, Ed’s lawyers said in a statement, “The judgement is an emphatic vindication of the creative genius of Ed, Johnny and Steve.”

Ed, Johnny and Steve issued their own lengthy statement, in which they spoke of the “cost” of the lawsuits, noting, “There is a cost on creativity. When we are tangled up in lawsuits, we are not making music or playing shows. There is a cost on our mental health. The stress this causes on all sides is immense…It is so painful to hear someone publicly, and aggressively, challenge your integrity.”

They conclude, “Our message to songwriters everywhere is: Please support each other. Be kind to one another. Let’s continue to cultivate a spirit of community and creativity.”

Ed additionally posted a video statement online, pointing out in part that with only “12 notes available…and very few chords used in pop music, coincidence is bound to happen.”

He continued, “I hope with this ruling, it means in the future baseless claims like this can be avoided…Hopefully, we can all get back to writing songs rather than having to prove that we can write them.”