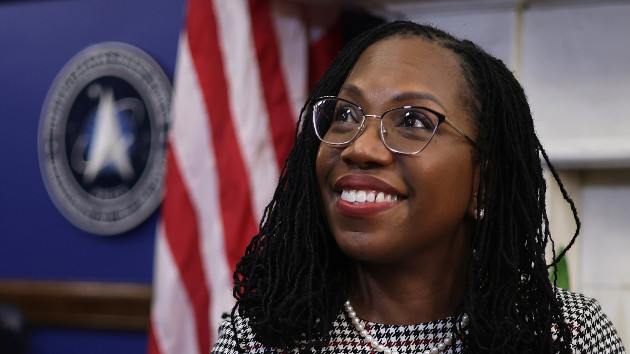 At the same time, two more Republicans — Sen. Lisa Murkowski of Alaska and Mitt Romney of Utah — announced they would vote for Jackson’s confirmation when the full Senate is expected to vote later this week.

“After multiple in-depth conversations with Judge Jackson and deliberative review of her record and recent hearings, I will support her historic nomination to be an Associate Justice on the U.S. Supreme Court,” Murkowski said in a statement.

“My support rests on Judge Jackson’s qualifications, which no one questions; her demonstrated judicial independence; her demeanor and temperament; and the important perspective she would bring to the court as a replacement for Justice Breyer,” she said.

“It also rests on my rejection of the corrosive politicization of the review process for Supreme Court nominees, which, on both sides of the aisle, is growing worse and more detached from reality by the year. While I have not and will not agree with all of Judge Jackson’s decisions and opinions, her approach to cases is carefully considered and is generally well-reasoned,” she continued. “She answered satisfactorily to my questions about matters like the Chevron doctrine, the Second Amendment, landmark Alaska laws, and Alaska Native issues. The support she has received from law enforcement agencies around the country is significant and demonstrates the judge is one who brings balance to her decisions.”

“After reviewing Judge Jackson’s record and testimony, I have concluded that she is a well-qualified jurist and a person of honor. While I do not expect to agree with every decision she may make on the Court, I believe that she more than meets the standard of excellence and integrity. I congratulate Judge Jackson on her expected confirmation and look forward to her continued service to our nation,” he said.

Their statements came hours after, as anticipated, the Senate Judiciary Committee deadlocked along party lines in an 11-11 vote Monday on whether to send Jackson’s nomination to the full Senate.

The tie vote forced Senate Majority Leader Chuck Schumer to file a discharge motion to bring the nomination before the full Senate in order to get it out of committee and Democrats were expected to prevail on the procedural move Monday evening — especially now with support from Romney and Murkowski.

Earlier, only one Republican, Maine’s Sen. Susan Collins, has said she would vote for Jackson.

Ranking Member Sen. Chuck Grassley, R-Iowa, announced after the committee kicked off its business Monday morning that he will vote no on Jackson’s nomination, paving the way for the 22-member, evenly-split committee to end in a tie vote.

But there was also an unintended delay forced by a Democratic senator.

“We have a problem,” said Chair Dick Durbin, D-Ill, explaining that Sen. Padilla, D-Calif., whose presence is needed for the vote, was delayed when an overnight flight from Los Angeles had to return to the airport for a medical emergency, so the committee is in recess until he returns.

As the committee ticked through opening statements Monday, Republicans continued to raise issues with Jackson’s record, and Democrats defended Jackson from what they recalled as “hurtful” questioning from GOP senators.

“We are going to have our political substantive disagreements, but it was the treatment in some of these questions that triggered a hurt in so many people I know and have encountered,” said Sen. Cory Booker, D-N.J., reflecting on the hearings. “How qualified do you have to be?” he asked, going on to repeat her qualifications and fact that’s she been confirmed three times on a bipartisan vote before the Senate.

Sen. Lindsey Graham, R-S.C., meanwhile, said in his time that if Republicans had controlled the Senate, Jackson would have never been given hearings. Notably, Senate Republican Leader Mitch McConnell recently refused to say if Biden Supreme Court nominees would be considered if Republicans retake the Senate.

“If we get back the Senate and we are in charge of this body and there is judicial openings, we will talk to our colleagues on the other side,” he said. “But if we are in charge, she would not have been before this committee. You would have had somebody more moderate than this.”

Even without Republican support, Democrats have the power to push her nomination forward. The final vote, while bipartisan, will likely be narrower than what the White House had hoped for.

“What I know is she will get enough votes to get confirmed,” White House chief of staff Ron Klain told ABC “This Week” anchor George Stephanopoulos on Sunday. “In the end, I suppose, that’s the only thing that matters. But I wish more Republicans would look at the case here, look at the record and vote to confirm Judge Jackson.”