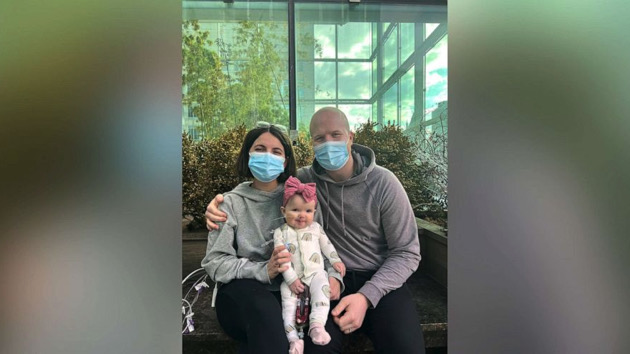 (CHICAGO) — A baby girl who has been living in a Chicago hospital with her parents for the last six months while waiting for a new heart finally received one last week.

Elodie Carmen Baker received a heart transplant at The Heart Center at Lurie Children’s Hospital on March 27. Elodie was about 7 weeks old when she was diagnosed with a rare heart condition in August 2021 called dilated cardiomyopathy. She had been on the waitlist for a new heart for over 200 days.

Elodie’s mother, Kate Baker, still remembers the moment she knew something was wrong.

“Our pregnancy was normal and we had an uncomplicated delivery and actually went home with Elodie,” the first-time mom said in an interview with Good Morning America. “So she was with us in Minnesota at home for seven weeks and one night, she wouldn’t feed. I was nursing and she let out this cry and my heart just sank and I said to (my husband) Collin, ‘Something’s wrong. We need to take her in.'”

At the emergency room, Baker said doctors initially didn’t see anything that stood out to them.

“I think they were considering maybe sending us home but they said, ‘Let’s just get an X-ray to be sure,'” she said. “Then the X-ray came back. They saw her heart was enlarged and that was on Aug. 21. And we haven’t been home since.”

According to the Centers for Disease Control and Prevention, children and adults with dilated cardiomyopathy have an enlarged heart chamber (ventricle), which can make the muscle unable to pump blood throughout the body sufficiently. There are other types of cardiomyopathy as well as varying symptoms of disease, and some may not even see symptoms arise during their lifetime.

Dr. Anna Joong, the medical director of the pediatric ventricular assist device program at Lurie Children’s, has been caring for Elodie for the past several months.

“In Elodie’s case, the genetic test did not reveal an answer for why she developed this kind of cardiomyopathy and in that situation, it’s called idiopathic dilated cardiomyopathy, meaning at this point in time, we don’t really know why this happened to her,” Joong told GMA.

Doctors would later tell the Bakers that their daughter would need a new heart. “The muscle in hers is really weak. And so it’s expanded over time, it hasn’t been able to push the blood out, pump it out to the rest of the body and so it’s dilated, and now hers looks more like a pancake,” Baker said.

Two months after the diagnosis, Elodie was flown to Lurie Children’s Hospital in Illinois from her home state of Minnesota, where she underwent surgery to have a Berlin EXCOR pediatric ventricular assist device (VAD) placed.

The VAD essentially acted as a heart for Elodie, pumping blood for her while she waited for a transplant.

“Her heart was so sick, that the IV medicines just weren’t enough and she needed a VAD,” Joong said. “We use this device as a way to bridge her to transplant so it’s a way to support her heart, to help get her stronger in the time that she’s waiting for her donor heart.”

As Elodie waited for a new heart, she started eating more, both with and without a feeding tube. Nora Hammond, a nurse practitioner at Lurie’s who has also cared for Elodie, explained to GMA, “Post-VAD, Elodie was able to tolerate feeds through a feeding tube to provide her with the calories she needed to grow, but also was able to try a lot of foods by mouth which she loved! Lots of avocado.”

Elodie also participated in various therapies to help her get stronger day by day — from occupational and physical to speech therapy — and along the way, she has reached many of the milestones typical for a baby her age.

Dr. Michael Mongé, surgical director of the Heart Failure/Heart Transplant Program at Lurie Children’s, operated on Elodie and noted that Elodie’s care has been an enormous collective effort. “The entire team of physical therapists, hematologists, cardiologists, intensive care doctors, surgeons, all participated in her care, which I think really contributed to how well she has done both since arrival here at Lurie and following VAD implant.”

Elodie has been recovering following her transplant and is receiving medication as well.

“She will continue to use a (feeding) tube after transplant but after she recovers, will slowly try to decrease the amount of food through the tube to encourage her to be able to meet caloric needs by mouth,” Hammond told GMA.

“The breathing tube was able to come out within hours of coming out of the operating room. Her new heart works beautifully and is really strong,” Joong added. “She is getting routine immunosuppression medications to prevent rejection. She has already been transferred out of ICU level care and is sitting up. She is one strong kid and we are so grateful to the donor family.”

Joong, Mongé and the Bakers all hope that Elodie’s story will inspire others to consider organ donation, especially since April is National Donate Life Month, an initiative by the nonprofit Donate Life America to raise awareness about giving the gift of an organ or tissue.

“We’ve both been donors our whole lives. But I’ve never thought much about it. It’s just a box that I’ve checked when I renewed my driver’s license,” Kate Baker said. “Now, we spend a lot of time educating ourselves on the subject and we try to use our CaringBridge site to raise awareness.”

“(Elodie’s story) highlights the importance of organ donation and people being organ donors. The waitlist times have increased over time,” Mongé added.

“The number of organs available each year is relatively constant whereas more and more children continue to get admitted to the hospital and in heart failure. So it really is important to stress the need for people to be organ donors so that people like Elodie can receive a transplant,” Mongé said.