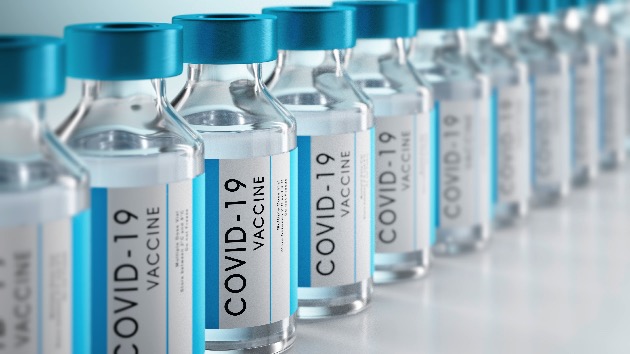 (NEW YORK) — As the COVID-19 pandemic has swept the globe, more than 5 million people have died from the disease worldwide, including over 747,000 Americans, according to real-time data compiled by Johns Hopkins University’s Center for Systems Science and Engineering.

Just 67.9% of Americans ages 12 and up are fully vaccinated against COVID-19, according to data from the U.S. Centers for Disease Control and Prevention.

Several major pharmacy chains told ABC News they are gearing up to offer the Pfizer vaccine to 5- to 11-year-olds within days of its approval by the U.S. Centers for Disease Control and Prevention.

The agency is expected to give the green light as early as Tuesday night. If approved, roughly 28 million children would be eligible for the mRNA vaccine.

“We expect to be able to provide vaccinations for this age group shortly after November 3,” Rite Aid said in a statement.

Walgreens said in a statement that, “appointments will open as we receive supply to stores, beginning this week.”

A spokesperson for CVS said the chain will share more specifics about its vaccine rollout once the authorization is made, and will provide customers with information on its website.

“We have played a prominent role in administering third doses to the immunocompromised and authorized booster shots, and are prepared to expand vaccine eligibility to ages 5-11 as soon as authorized to do so by public health agencies,” CVS said in a statement.

A federal rule on vaccine mandates for businesses will be released this week, according to the Labor Department.

The rule will require employers with 100 employers or more to mandate the vaccine or weekly testing. It also will require large businesses to provide paid time off to workers to get the shot and recover from side effects from the vaccine.

It’s not clear when the rule will take effect.

President Joe Biden first announced the rule in September and it’s since been making its way through the regulatory process.

The U.S. reported about 101,000 child COVID-19 cases last week, marking the eighth consecutive week of declines in pediatric infections since the pandemic peak of nearly 252,000 cases in early September, according to the American Academy of Pediatrics and the Children’s Hospital Association.

The rate of pediatric hospital admissions is also declining.

Approximately 45.3% of adolescents ages 12 to 17 have been fully vaccinated against COVID-19, according to federal data.

Severe illness due to COVID-19 remains “uncommon” among children, AAP and CHA said. However, AAP and CHA continue to warn that there is an urgent need to collect more data on the long-term consequences of the pandemic on children, “including ways the virus may harm the long-term physical health of infected children, as well as its emotional and mental health effects.”

An independent CDC advisory panel will convene at 11 a.m. Tuesday to debate and hold a nonbinding vote on whether to recommend the Pfizer vaccine for the roughly 28 million kids ages 5 to 11 in the U.S.

The CDC panel is expected to vote around 4:15 p.m.

If the panel decides to move ahead, CDC Director Rochelle Walensky must sign off on those specific recommendations, which would likely happen Tuesday evening.

No pediatric vaccinations will start until Walensky gives the green light. If that happens Tuesday evening, shots could start going into younger children’s arms beginning Wednesday.

The White House has purchased 65 million Pfizer pediatric vaccine doses — more than enough to fully vaccine all American children in this age group.