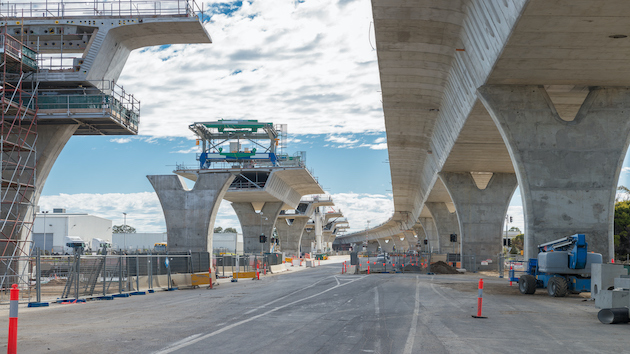 (WASHINGTON) — Transportation Secretary Pete Buttigieg is “optimistic” that the bipartisan infrastructure bill will pass the House and Senate, he said Sunday.

“We’re very optimistic the president put forward this framework because he believes that it will pass the House in the Senate and can get to his desk, and as soon as it does, it’s going to make such a difference in the lives of Americans,” Buttigieg told ABC “This Week” anchor George Stephanopoulos.

Congress was not able to reach a deal on President Joe Biden’s $1.1 trillion infrastructure bill as the House pushed off the vote before Biden left for his trip to the G20 summit in Italy.

In her dear colleague letter that she sent out Thursday, Speaker of the House Nancy Pelosi (D-Calif.) reiterated members’ support for the Bipartisan Infrastructure Framework, even though the vote has been postponed.

“The good news is that most members who were not prepared for a yes vote today have expressed their commitment to support the BIF.”

Even though there seems to be consensus among House members that they are prepared to pass the infrastructure bill, Stephanopoulos pointed out that a new ABC News/Ipsos poll shows that 69% of the public does not know much about what is in the bill, and 32% believe the bill will hurt them.

Buttigieg responded by focusing on the family-focused aspects of the bill, such as affordable child care, universal preschool and a possible child tax credit expansion. He addressed the audience directly saying, “[if] you have kids, nine out of 10 chance that you will personally benefit to the tune of hundreds or thousands of dollars from that child tax credit expansion.”

Stephanopoulos pressed Buttigieg over paid family leave being dropped from the bill and asked if there’s any chance of bringing the provision back.

“It’s definitely something that we believe in, and so while it is not in this framework, we’re gonna keep fighting for it,” Buttigieg said.

Despite the changes to the framework, Buttigieg defended the current state of the infrastructure package and said there’s a “sense of urgency” to get the bill passed because “American people are impatient to see pro-family policies.”

“It is the most transformative legislation for families, for health care, [and] for climate that we’ve seen, certainly in my lifetime, and it’s going to be an extraordinary achievement,” he said.

The secretary also mentioned an almost $12,500 discount on electric vehicles in an effort to “benefit the climate” and create more American jobs.

“So, look, whether you’re a policy wonk or whether you’re just trying to get through life raising your family, anybody who has ever driven on a road or a bridge, anybody who drinks water … anybody concerned about internet access coming to a neighborhood near you, this bill is for you,” Buttigieg said.

Even though Buttigieg is optimistic the bill will pass, Stephanopoulos pointed out that we have yet to see support for the bill from Democratic moderates Sen. Kyrsten Sinema, D-Ariz., and Sen. Joe Manchin, D-W.Va.

“Again, we’re the closest we have ever been,” Buttigieg said. “The president put forward this framework having talked to them and others throughout the progressive and moderate wings of our party, confident that it will pass.”

“I know you’re confident, but what are the consequences of failure?” Stephanopoulos pressed.