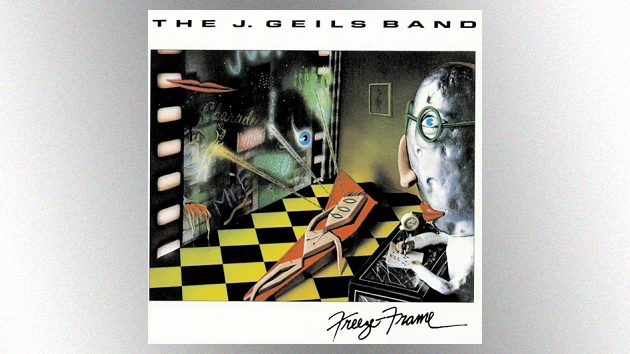 This week marks the 40th anniversary of the release of The J.Geils Band‘s chart-topping album, Freeze-Frame.

The album spent four weeks at #1 on the Billboard 200 in February of 1982, while the song “Centerfold” became the group’s only single to top the Billboard Hot 100, enjoying a six-week run at the pinnacle of the chart around the same time.

Freeze-Frame also yielded a #4 Hot 100 hit with its title track, while a third single, the ballad “Angel in Blue,” peaked at #40.

The popularity of “Centerfold” and “Freeze-Frame” were bolstered by music videos for the tunes that went into heavy rotation on MTV.

Keyboardist Seth Justman wrote or co-wrote all of Freeze-Frame‘s nine tracks, and he produced and arranged the record. Four of the songs were co-penned by frontman Peter Wolf, among them “Freeze-Frame.”

Freeze-Frame, which was The J. Geils Band’s 10th studio effort, went on to sell more than one million copies in the U.S., making it the group’s only album to be certified Platinum by the RIAA.

Wolf left The J. Geils Band in 1983 because of disagreements over the group’s musical direction, and began solo career. The band released just one more studio album, 1984’s You’re Gettin’ Even While I’m Gettin’ Odd, which featured Justman taking over lead vocals. The band broke up in ’85.

Over the years, J. Geils Band members have participated in various full or partial reunions, most recently in 2015. Band leader and guitarist John “J.” Geils died in 2017 at age 71.

“Freeze-Frame”
“Rage in the Cage”
“Centerfold”
“Do You Remember When”
“Insane, Insane Again”
“Flamethrower”
“River Blindness”
“Angel in Blue”
“P*** on the Wall”