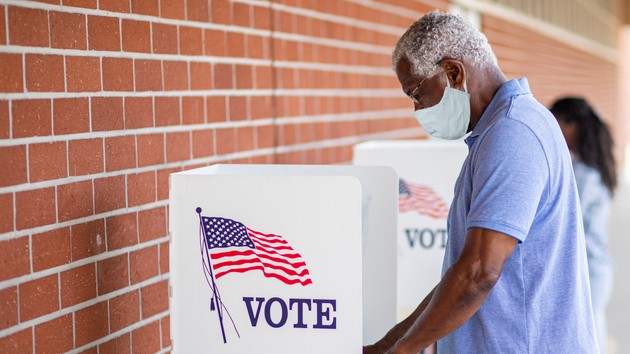 (VIRGINIA) — With just over a week to go until the last day of voting in Virginia and New Jersey, former President Barack Obama is joining each state’s Democratic nominee for governor on the campaign trail Saturday, hoping to motivate the party’s base to turn out in their state’s off-year general elections.

Always held the year after a presidential election, the statewide and legislative races in both states are seen as bellwethers for the nation’s political landscape going into the midterms. A strong showing by Democrats could assuage party fears about 2022, but if Republicans make gains, it will serve as a warning shot for Democrats as they try to connect with voters in the post-Trump era.

“Let’s be clear about who this man is. He has the life experience, the professional experience, the experience in this state. … he walks his talk, he is a fighter,” Harris said of McAuliffe. “When you elect somebody or governor, you want to make sure you really know who they are. Well, we know who Terry is.”

Acknowledging how close the race is between McAuliffe and Republican Glenn Youngkin, she added, “We got to make it clear that we’re not taking anything for granted. You know, four years ago, there was a lot of folks who said, ‘Oh, if I don’t vote, everything will be alright. It wasn’t alright.”

McAuliffe also has an event planned with President Joe Biden in deep blue Arlington on Tuesday. While Biden and McAuliffe have been friends for over 40 years, the president hasn’t stumped with him since late July. Earlier this month, McAuliffe acknowledged Biden’s approval rating has taken a hit since then.
“We are facing a lot of headwinds from Washington, as you know. The president is unpopular today unfortunately here in Virginia, so we have got to plow through,” he said at a virtual rally.

Those headwinds appear to be hampering McAuliffe more than Murphy, according to public polling.
A September poll from Monmouth University showed Murphy with a 13-point lead over his Republican opponent, former Assemblyman Jack Ciattarelli, among New Jersey registered voters. Ciattarelli has taken aim at Murphy’s handling of the COVID19 pandemic, arguing the Democrat’s policies have been too restrictive and the state’s economy has suffered for it. But according to Monmouth’s poll, half of registered voters have more trust in Murphy to handle the pandemic.

On the economy and taxes, issues that have been front and center in Ciattarelli’s campaign, the Republican fares better against Murphy.

In Virginia, however, the gubernatorial race is neck and neck. A Monmouth poll out Wednesday showed McAuliffe and Youngkin, a former private equity executive, tied among registered voters, and for the first time in the university’s polling of this race, Youngkin leads in one probabilistic likely electorate model.