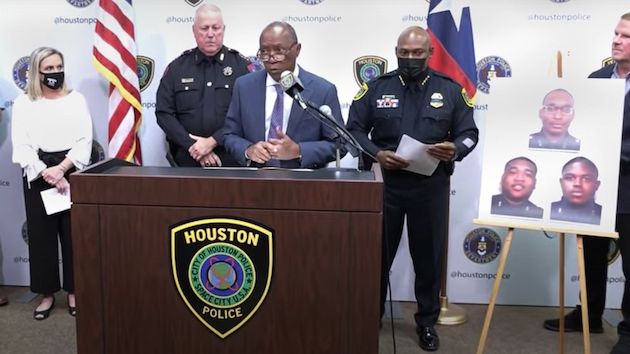 (NEW YORK) — The reward for information leading to the arrest of a gunman who investigators said ambushed and killed a Texas constable deputy and wounded his two colleagues outside a Houston sports bar has grown to $75,000.

Saying he was “frustrated and angry” over the Saturday morning attack, Houston Mayor Sylvester Turner pleaded with the public to help authorities bring the “person or persons responsible for these shootings” to justice.

“These persons are still out there, and I’m a firm believer that somebody knows or has information that can lead to their arrest and conviction,” Turner said at a news conference Wednesday afternoon.

Tilman Fertitta, the billionaire owner of the Houston Rockets NBA basketball team, joined Turner to announce that he is adding $40,000 to the reward fund. Fertitta said another $25,000 had been offered by an anonymous donor while Crime Stoppers of Houston and the 100 Club, a nonprofit city police support group, combined to put up $10,000.

“We’re going to come after you if you commit a deadly crime in this city,” said Fertitta, directing his words at the killer or killers. “You pull that gun out and you shoot somebody, you are going to spend the rest of your life in prison because we are going to catch you and we are going to do whatever it takes in this city not to be like other big cities.”

Killed in the triple shooting was deputy Kareem Atkins, 30, a married father of two children, ages 2 years and 6 months, who had just returned to work from paternity leave. Deputy Darrell Garrett, 28, was shot in the back and critically wounded, authorities said. The third deputy, Juqaim Barthen, 26, was discharged from the hospital on Wednesday after he sustained a non-life-threatening gunshot wound.

The Harris County Precinct 4 constable deputies were working an extra job around 2:15 a.m. on Saturday at the 45 Norte Sports Bar in the Independence Heights neighborhood of north Houston when they were called outside to intervene in a possible robbery in progress, according to the Houston Police Department.

Atkins and Garrett entered the parking lot and began to arrest a possible suspect when a second suspect emerged and opened fire with an AR-15 rifle, striking both, according to police. Upon hearing the gunshots, Barthen rushed to help and was shot in the foot.

The suspected gunman was described by police as a heavy-set, bearded Hispanic man in his early 20s who was wearing a white T-shirt and blue jeans.

“They were slaughtered,” Constable for Precinct 4 Mark Herman said of his deputies. “The way this happened should have never happened anywhere.”

Herman said Garrett, who’s engaged to be married, remains in critical condition and described his status as “touch and go.”

Houston Police Chief Troy Finner said investigators are pursuing leads that have come in from the public but acknowledged no suspects are in custody.

“But I stand here strong with our community members,” said Finner, whose agency has mourned four officers killed in shootings in the past 21 months. “We’re not going to stand by while somebody is murdering police officers and anybody else.”