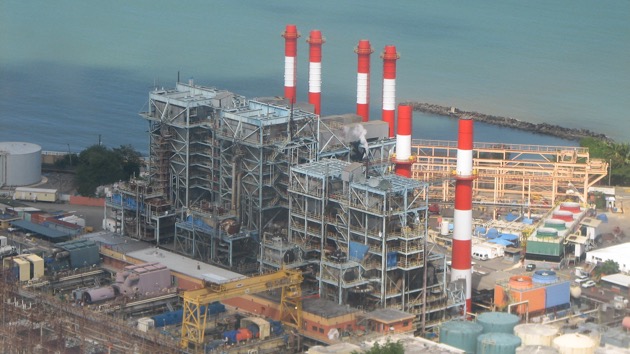 (NEW YORK) — “Luma out” and “If I can’t breathe, Luma shouldn’t charge us,” read some of the banners held by hundreds of Puerto Rico’s residents as they marched on a main highway Friday in protest against Luma Energy, the island’s power company.

Puerto Rico has had a long history of instability with its electric system, even prior to the devastation Hurricane Maria wreaked in 2017, which left millions on the island without power for nearly a year.

Still, blackout and brownouts are a part of daily life for Puerto Rico’s citizens, with a recent power outage now affecting thousands.

The combination of Luma’s late response to failures in the transmission and distribution that have left thousands without power in the last months, and the weak infrastructure of the power plants has made Puerto Rico’s electric service the worst among the U.S.’ states and territories, experts say.

“Most of these power plants should have been decommissioned many years ago. But when you decommission something, you need to have something new,” Puerto Rico’s Electric Power Authority former executive director Ricardo Ramos told ABC News.

ABC News requested a comment from Luma Energy and has yet to receive a response.

PREPA’s gas power plants are over 40 years old. The average lifespan of these power plants is about 20 years, according to one report by National Renewable Energy Laboratory.

Ramos, who says he has worked in the energy industry all his life, told ABC News that the situation with Puerto Rico’s power is the result of a “perfect storm” of failures that perpetuate the island’s electricity woes.

Problems with electricity have been reported since PREPA was established in 1941, Ramos said.

In the1960’s Puerto Rico began building power plants, but amid the island nation’s industrial revolution plus a then-predicted business boom, those power plants were built larger than the country could manage.

“At that time, bunker type C oil was extremely cheap. So it was chosen to use that fuel in order to have a competitive, let’s say, electricity tariff,” Ramos told ABC News.

More businesses actually began leaving the island, and Puerto Rico ended up with a majority of its larger power plants located in the southern area of the island, while the most electric consumption has been in the north, Ramos said.

That has resulted in a complex geographical situation for the island’s transmission and distribution, now managed by Luma, he said.

Prior to Luma’s takeover on June 1, 2021, the government entity, PREPA, was in charge. Today, the government only owns the system that generates electricity while Luma oversees transmission and management.

The mix of an expensive system, mismanagement and lack of maintenance drove PREPA into a more dire situation, according to energy financial expert, Tom Sanzillo.

“You can look at it as unfunded maintenance over a long period of time,” Sanzillo told ABC News.

Sanzillo is the director of financial analysis of the Institute of Energy and Economics and Financial Analysis, and is a former New York State comptroller.

“You can look at it as the misuse of the revenues that have come in from the ratepayers over a number of years,” Sanzillo told ABC News.

Both Sanzillo and Ramos say that effective energy projects take time, can be complicated, and must include collaboration between key players from stakeholders to politicians.

“A power system is very hard to work on, decisions have to be made years prior,” Sanzillo added.

In addition, financing energy projects involves a large amount of investment, he said, and that PREPA’s investment came from the bond market and loans.

As the electric utility issued bonds to finance energy projects that typically take over six years to build, the island’s politics got in the way.

“If you’re changing the management every four years, and you already have, let’s say, immediate bonds for a project, and the project doesn’t exist, it can quickly become a mess,” Ramos told ABC News.

“You have a combination of a system and disrepair and political mismanagement at the top of the agency, and you have a recipe for a real problem,” Sanzillo from IEEFA said.

In 2017, the financial oversight board imposed by Congress filed Title 3 papers for the bankruptcy process of PREPA.

Bankruptcy proceedings are still underway, according to local media reports.

Amid Hurricane Maria’s destruction, the Trump administration designated one of the biggest federal funds with nearly $10 billion for PREPA’s reconstruction. As of today only $7.1 million has been disbursed, according to Puerto Rico’s government.

Sanzillo says using funds for the expansion of a solar system on the island could help change the situation.

“You would have less stress on what is clearly a fragile system,” he added.