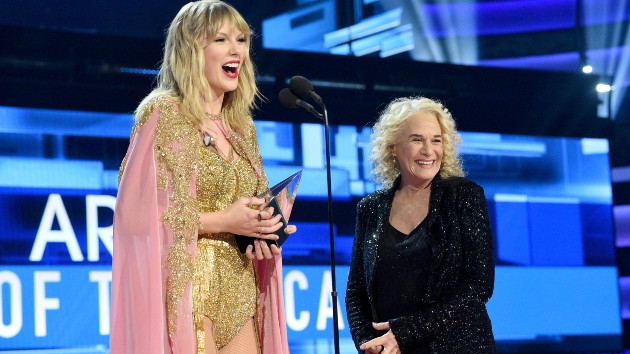 Taylor Swift will induct Carole King into the Rock and Roll Hall of Fame on October 30, during a ceremony at  Rocket Mortgage Fieldhouse in Cleveland, OH.  Taylor will also perform as part of a tribute to King, whose iconic album Tapestry pretty much set the standard for singer/songwriters 50 years ago.

Jennifer Hudson will be part of that tribute as well; she and King co-wrote the song “Here I Am (Singing My Way Home)” for her recent movie, Respect, and performed it on the soundtrack.  In Respect, J-Hud played the late Aretha Franklin; King wrote one of Franklin’s most memorable hits, “(You Make Me Feel Like A) Natural Woman.”

Angela Bassett, who portrayed Tina Turner in the biopic What’s Love Got to Do With It, will induct Turner, and the Queen of Rock ‘n Roll will be saluted with performances by Christina Aguilera, H.E.R., country star Mickey Guyton and Tina’s “It’s Only Love” duet partner, Bryan Adams.

Drew Barrymore will induct groundbreaking female rockers The Go-Go‘s, and none other than Beatles legend Paul McCartney will do the honors for Foo Fighters.  Meanwhile, Lionel Richie will present pioneering record executive Clarence Avant with a special award.

More presenters and performers will be announced soon.  The Rock and Roll Hall of Fame induction ceremony will air November 20 on HBO and stream on HBO Max.