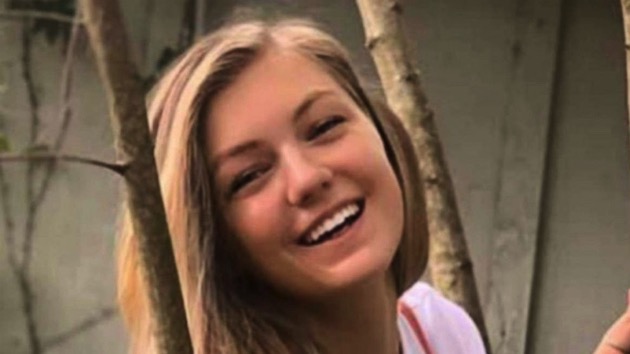 (NEW YORK) — When a Wyoming coroner announced Tuesday that Gabby Petito, the 22-year-old travel blogger whose remains were recovered in September in a national park, died by strangulation, experts who study intimate partner violence said they saw a recognizable thread.

“Strangulation is not talked about as much, but it is a major risk factor for intimate partner homicide,” Kellie Lynch, an associate professor at the University of Texas at San Antonio, told Good Morning America. “And we often see it occur alongside more severe abuse.”

“When you’re talking about strangulation, that is very typically the cause of death in domestic violence cases,” Dan Abrams, ABC News chief legal analyst, said in an interview Wednesday on GMA. “It is angry. It is violent. It takes time. That is precisely what many believe happened here.”

Petito’s death was ruled a homicide and the cause is officially listed as “manual strangulation/throttling,” according to the coroner.

Petito’s boyfriend and cross-country traveling companion, Brian Laundrie, has been named by investigators as a person of interest in her death and is the subject of a massive nationwide search being directed by the FBI.

While the search continues for Laundrie, he’s also wanted on charges of bank fraud for allegedly using Petito’s credit card. Experts said the case has shined a spotlight on intimate partner violence and the many forms it can take.

Strangulation is one of the most lethal forms of domestic violence, one that can cause death within minutes, according to the National Domestic Violence Hotline, a 24/7, free and confidential resource.

It is also a predictor for future deadly violence, experts said. A non-fatal strangling in the past by a partner makes the victim 10 times more likely to be killed by them later on, according to the National Domestic Violence Hotline.

“I think people are now starting to appreciate the seriousness of strangulation, both that it’s more frequent than we realize and also that it can be more lethal than we realize,” Kiersten Stewart, director of public policy and advocacy of Futures Without Violence, a nonprofit organization focused on ending violence against women and children, told GMA. “When we train health care providers, strangulation is one of the very specific issues that we talk about to help them recognize it.”

Symptoms of strangulation can range from a sore throat and difficulty swallowing to bruising, memory loss, difficulty breathing and changes in sleep, mood and personality, among others, according to the National Domestic Violence Hotline.

Strangulation in cases of intimate partner violence is often about control, and in non-fatal cases, it may not leave as evident of a mark as other forms of physical abuse, experts said.

Stewart and other experts note that when cases like Petito’s are in the news, though extremely tragic, they can raise awareness about intimate partner violence and the many different forms it may take.

“Domestic violence is still a very serious issue,” said Stewart, noting young people between the ages of 18 and 24 experience the highest rates of domestic violence. “As a country, we have made great progress in the last 25 years, but we haven’t actually reduced homicides nearly as dramatically, and that still needs to be a real focus.”

In his eulogy at his daughter’s funeral last month, Joseph Petito referenced the issue, telling mourners, “If there is a relationship that you’re in that might not be the best thing for you, leave it now. Take care of yourself first.”

Intimate partner violence, which falls under the broader umbrella term of domestic violence, affects more than 12 million people every year, and disproportionately impacts Black and Indigenous women, according to the National Domestic Violence Hotline. It has historically been seen by many as something that happens with older, married couples, or something that involves only physical abuse, like a black eye, the organization said.

In reality, it is something that cuts across all social and demographic lines and can also occur through control and manipulation that is not as easily visible to the outside world, according to Lynch.

“We have these myths or stereotypes in our head of a typical domestic violence abuser and victim, who they are and what they act like, but everybody is at risk,” she said. “People would be very surprised to find out just how prevalent it is and how many people they know who’ve experienced it at some point.”

While acknowledging that not all details of the incident are known, both Lynch and Stewart pointed to body camera footage of Petito and Laundrie being pulled over in Arches National Park in Utah in August after a report of an alleged domestic problem.

The footage showed Petito, who appeared to be crying, at one point sitting in the back of a police vehicle, and Laundrie, at other points, talking to police officers.

Petito told police she suffers from severe anxiety and other medical conditions and that the couple’s argument had been building for days. Police labeled the incident as a “mental/emotional break” rather than a domestic assault, according to the police report.

“I don’t know how much we’re going to know about the relationship and the dynamic between the two of them, but in the video, she seemed frightened and scared,” Lynch said of Petito. “I think across all of these cases [of intimate partner violence], that’s what you’re going to see, someone is intimidated.”

Stewart said she sees in the video fear from Petito, which she calls a red flag.

“You can’t always tell the first time you meet somebody what’s going on,” she said. “But once you’ve started to have a conversation, if you see somebody who’s very much afraid, like, ‘If I were to not do what he wants, what happens?’ that’s often a red flag.”

Abuse in relationships, which data shows is more often, but not always, perpetrated by men, comes down to “power and control,” according to Rosemary Estrada-Rade, director of quality assurance and innovation at the National Domestic Violence Hotline.

“It’s about that pattern of behaviors that are used within relationships to maintain that control over the other partner,” she said. “So it could be physical violence, but a lot of times it’s intimidation, manipulation, emotional abuse, financial abuse and financial control, and that can look different in different relationships.”

Signs that someone may be suffering from intimate partner violence include isolation from family and friends, appearing withdrawn or not like themselves, frequent calls or texts from their partner about where they are and who they’re with and other controlling behaviors, like withholding money or restricting a person’s ability to work, according to Estrada-Rade.

When a case like Petito’s is in the headlines, it can help draw awareness to the issue of intimate partner violence and increase education, experts said.

In Sarasota, Florida, around 30 miles from the town where police say Laundrie was last seen, calls to a local domestic violence shelter have increased 15% over the past month, compared to the same time last year. The shelter’s CEO attributes the increase to both the pandemic and headlines around the Petito case.

“Domestic violence is something that people shy away from, they don’t want to talk about it,” Jessica Hays, president and CEO of Safe Place and Rape Crisis Center in Sarasota, told “GMA.” “I think that anytime that we have an opportunity to talk about how common domestic violence is, and the warning signs and just shine a light on the fact that this is something that affects many, many people and is not the fault of the victim and that there is help and support out there, that’s a really important conversation.”

The National Domestic Violence Hotline has experienced a 46% increase in contacts in the past five years, according to a spokeswoman, who also attributed the yearslong increase in calls to a combination of factors.

“While we can’t say definitively that seeing or hearing about reports of abuse or domestic violence in the media causes an increase in contacts, we do know that news reports and even depictions of tactics of power and control in other media can help survivors recognize that they might be experiencing abuse and that they can reach out to us,” the spokeswoman said.

Experts said that is the most important takeaway, the recognition that there is help out there for everyone touched by intimate partner violence, from those experiencing it to those committing it to those trying to help.

“During this Domestic Violence Awareness Month, we really are encouraging those who feel that they may be in an abusive or controlling relationship to get help, to talk to somebody,” said Stewart. “And also, we really encourage people who may be using violence in their relationships to also reach out for help because that’s really the behavior we need to change.”

If you need help or need help supporting someone else, call the National Domestic Violence Hotline at 1-800-799-7233, or go to thehotline.org. All calls are toll-free and confidential. The hotline is available 24/7 in more than 170 languages.