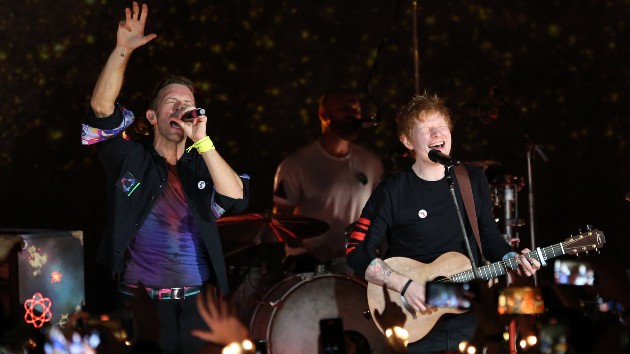 Coldplay had a special guest at their album launch party Tuesday night in London: Ed Sheeran.

Billboard reports that Chris Martin and company celebrated the impending release of their album Music of the Spheres at London’s O2 Shepherd’s Bush Empire, where Ed, as it happens, recently did a special show marking the 10th anniversary of his debut album + (Plus) with a special concert.

Ed popped up to sing Coldplay’s 2005 hit “Fix You” with the band at Tuesday’s concert, and then Coldplay returned the favor by performing Ed’s hit “Shape of You.”  You can watch fan-recorded footage of the performances on Twitter.

What’s the connection between the two acts, other than the fact that they’re both British superstars?  As Billboard notes, both Ed and Coldplay recently topped the charts thanks to K-pop supergroup BTS. In Ed’s case, he co-wrote the BTS number-one hit “Permission to Dance,” while Coldplay scored their second U.S. number-one hit by duetting with BTS on the song “My Universe.”

Coldplay’s Music of the Spheres arrives this Friday.  Ed’s new album, = (Equals), is out October 29.

Ed Sheeran is back on stage with Chris Martin!!! #London @coldplay pic.twitter.com/D433Fi7MCm