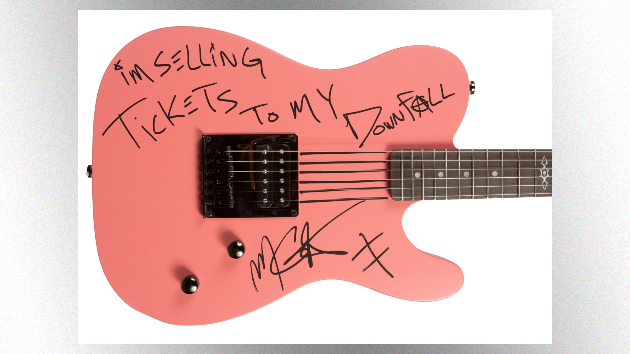 Both MGK and Hetfield are offering signed guitars: a salmon pink Schecter Diamond Series, and a black ESP Vulture, respectively. Kelly’s guitar, which is expected to fetch between $2,000 and $4,000, features the inscription “I’m Selling Tickets to My Downfall MGK,” a reference to the title of his latest album. The Hetfield guitar has an estimated worth of $4,000 to $6,000.

If you’re interested in the MGK guitar, you probably won’t have to compete with anyone who caught his Aftershock festival set this past weekend, which saw attendees throw bottles at the “Bloody Valentine’ singer. The incident is the latest entry in Kelly’s feud with the metal community after he insulted Slipknot.

Meanwhile, Slash is parting ways with one of his famous top hats, signed and featuring a hand-drawn skull-and-bones sketch. That’ll be sold alongside a sterling silver ring for an estimated total of $5,000 to $7,000. Slash is also contributing a signed Epiphone Slash Les Paul Deluxe, valued between $1,000 to $2,000.

Julien’s Auctions will handle the sale, which takes place January 30, ahead of the 2022 Grammys on January 31. For more info, visit JuliensAuctions.com.