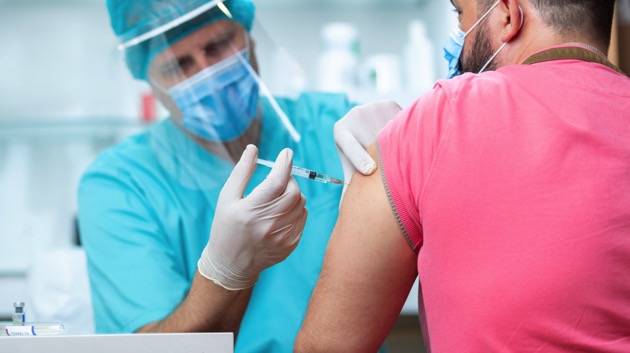 (PRESIDIO COUNTY, Texas) — Americans remain deeply polarized over the renewed push to get the country vaccinated.

Nowhere is such a divide more evident than in Texas, where the vaccination rates tend to vary drastically from county to county.

Presidio County — a remote area of southwest Texas, home to approximately 7,800 people — while rural, boasts the state’s highest vaccination rate, with nearly every one of its eligible residents fully vaccinated.

In the county, cell service is often spotty, and the closest medical center is hours away from most homes, but residents who chose to get vaccinated said they saw it as a matter of life or death.

Rosendo Scott, a Vietnam veteran, who is battling amyotrophic lateral sclerosis, or ALS, was more than willing to roll up his sleeve when he became eligible for a vaccine.

“We’re so isolated that we could easily just fall like dominoes, if something wasn’t done,” he told ABC News.

“It’s a 90-to-150-mile one-way trip to get to the emergency room, so I think some of that, just recognizing how limited we are for health care, contributed to our high vaccination rates,” Billing said.

Given the extremely high demand for vaccination, Billing said, all of the county’s available health care workers were pulled away from other duties in order to assist with the shots.

“We had to shut down our medical and dental service lines, and our behavioral health service lines, on these days that we did 500 or 600 vaccines at a time,” Billing said, adding that he has not recently seen a single vaccinated patient wind up in the hospital.

Scott explained that he has a very high level of trust in his health care providers, and thus, in their recommendation that he get vaccinated.

Scott’s wife, Allison, who is the principal of Marfa High School, in Presidio County, told ABC News that thanks to the county’s high vaccination rate, there have not been any coronavirus cases in the K-12 public school system since school started.

“So far — and this is our eighth week of school — we haven’t had a positive case, so we’re remaining hopeful,” she said.

However, more than 620 miles away, in Lamar County, the story is very different. Despite the availability of vaccines, only 40% of the residents have been fully vaccinated.

Klark Byrd, the managing editor of The Paris News, a small town newspaper, said he believes vaccine hesitancy in Lamar has been largely driven by residents’ “distrust in the government, distrust in the vaccine makers, [and] distrust, based on misinformation that’s found on social media sites.”

Given the low rate of vaccination in the county, Byrd has been printing op-eds, urging residents to talk to their doctors.

Although Byrd himself has not been vaccinated, due to a pre-existing health condition, he said he is taking all the necessary precautions to keep himself safe, with hand sanitizer, masks and social distancing.

“Sometimes, I’m the only one with a mask, and that’s concerning, but I maintain my distance with people. If I turn down an aisle at Walmart, and there’s a bunch of people, I will avoid that aisle and wait till it clears out,” he said.

Among the many who have opted not to get the shot is Kacy Cole.

Despite the fact that he has seen firsthand how serious COVID-19 can be, with several close friends and family, including his wife, contracting the virus, Cole said he has not reconsidered his anti-vaccine stance.

“It did not,” Cole told ABC News. “We prayed about it and we firmly believe that a lot of faith is involved in a lot of things we do.”

The decision of Cole, and other residents not to get vaccinated has been a tough pill to swallow for many front-line workers.

Dr. Amanda Green, the Lamar County health director and the local hospital’s chief medical officer, explained she wants to do her utmost to keep her community healthy, and the public educated about vaccines, but she tries to be realistic in her awareness that she may never be able to convince everyone.

“There are some people that I think they’ll just never change, no matter what,” Green told ABC News.

From Green’s perspective, such vaccine hesitancy can be a fatal choice. She pointed to Ronnie Stanley, the husband of a local nurse who chose not to get vaccinated. After falling ill to COVID-19, he wound up in the ICU, and died late last month.

“No one is invincible to this disease, it doesn’t care, it doesn’t discriminate,” Stanley’s widow, Amanda, told ABC News. She had urged him to get the shot, from the very beginning, but he was set in his ways, she said.

“He knew that it was as real as what it is, (but) he didn’t know that he would have been affected the way he did. I think had he known, then absolutely, he would have vaccinated and, you know, saved us all the torment that we’ve seen the last month. But yes, he was unvaccinated, and others believe that plays a big role in his death,” Amanda said

She is now seeking to convince those who are still hesitant, by telling his story.

“I don’t believe it has anything to do with politics,” she said about the COVID-19 vaccine. “I believe that this vaccine was created by brilliant doctors and scientists, and God gave them those abilities. And that’s what people need to understand, it’s a selfless act when you get vaccinated. It’s not for yourself, but it’s for those that you need to protect.”