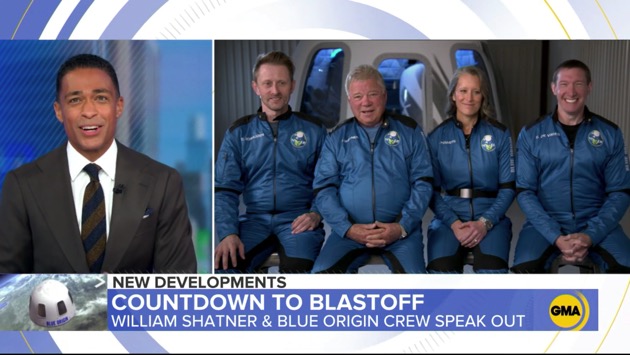 (NEW YORK) — William Shatner will make history Wednesday as he boldly goes where few have gone before while aboard Blue Origin’s New Shepard.

The Star Trek actor who played the iconic Captain Kirk joined Good Morning America Monday along with his fellow flight crew members as they anxiously await their delayed departure.

“I’m deeply disappointed because I was building up the enthusiastic response, now we have to wait another day,” Shatner said. “[But] it’s really worth it. What’s a day with this extraordinary experience that we’re about to have.”

The 11-minute ride to the edge of space about 60 miles above the earth’s surface comes just two months after the first successful Jeff Bezos-owned space flight with Wally Funk, 82.

Shatner, 90, is set to become the oldest person ever to go to space and will hit weightlessness in zero gravity for about four minutes.

Shatner said he expects plenty of Captain Kirk references as the world watches him and the crew in flight.

“Actually, I haven’t heard Shatner in a long time,” he said with a laugh.