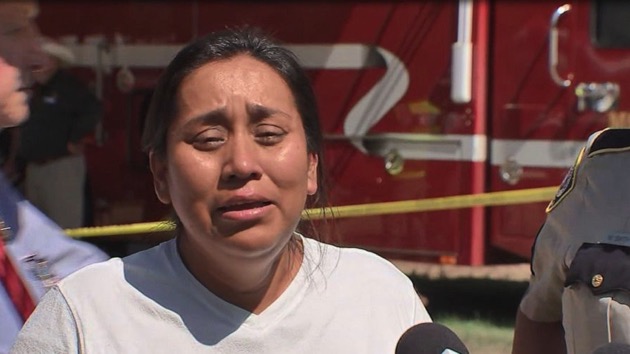 (HOUSTON) — A 3-year-old boy in Texas who has been missing since Wednesday has been found alive, officials said Saturday.

Christopher Ramirez was last seen playing with a neighbor’s dog while his mother unloaded groceries from her car outside their home in Grimes County Wednesday afternoon, authorities said. He followed the dog into the woods, and while the dog returned, he didn’t.

Search crews, including FBI personnel and community volunteers, had scoured the region with no signs of the boy for days.

Around noon local time Saturday, Texas EquuSearch, an organization that assists in search and recovery, announced that Christopher had been found. It shared a photo of him shirtless in a car, being cradled by a woman, though did not provide further details.

He was taken to Texas Children’s Hospital in the Woodlands, where he will be “observed and monitored for a period of time,” the sheriff said.

“A bit tired and dehydrated as well as hungry and in overall good spirits and healthy,” Sowell said.

Crews and community volunteers had been canvassing the wooded area, using drones and dogs to track Christopher’s scent, authorities said. On Friday, Sowell said they had expanded the search perimeter and would continue to search through the night and weekend.

Sowell had said there was no evidence of foul play, and family members were not persons of interest.

The boy’s mother, Araceli Nunez, had publicly pleaded for help in finding Christopher.

“I am asking you all to please help and find my son. I don’t know anything about him, and a lot of time has passed. I don’t know what to do. Please everyone help me,” she told reporters in Spanish at a press conference Thursday.

“I’m desperate and my heart has a hole in it. Please bring back my son, please help me,” she said.

The “humble and kind man” who found Christopher has requested anonymity, Sowell said on Facebook.

“I had several good visits with him and thanked him for being there,” the sheriff said. “He replied that God told him at Bible study yesterday evening to go look for him and he would find him. This morning the man did just that and the rest is a happy ending to this story.”