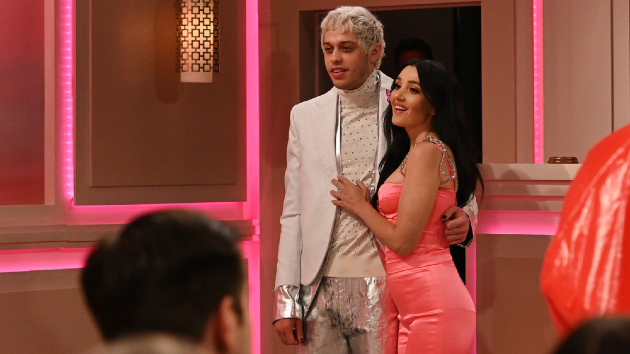 Machine Gun Kelly has joined the pantheon of celebrities who were impersonated on Saturday Night Live.

This past weekend’s episode featured a sketch in which host Kim Kardashian West played her sister Kourtney as the judge in a court show called The People’s Kourt. In the middle of the skit, Kourtney introduces her “bailiff and best friends,” MGK and Megan Fox, played by SNL cast members Pete Davidson and Chloe Fineman.

“Wait, why are we best friends?” Fineman’s Fox asks. “Because our boyfriends have tattoos for necks,” Kim’s Kourtney replies.

Kourtney’s boyfriend, of course, is Blink-182‘s Travis Barker, who collaborated with Kelly on his 2020 album Tickets to My Downfall. Barker also shows up in the sketch, as played by Mikey Day.

In a tweet in reaction to the sketch, Kelly wrote, “I think it’s time for me to come on the show as Pete.”

While he waits for the call from SNL, Kelly has been working on his Tickets follow-up album, Born with Horns. In an interview with NBC’s Sunday Today, Kelly teased that Born with Horns, which will also be produced by Barker, is set to be “more guitar-heavy” than its predecessor.

“Every album is a juxtaposition of the last album,” Kelly explained. “So I went and studied Tickets, and I heard the bright sound that I had, and for this album I just turned the lights off.”

Kelly dropped the lead Born with Horns single, “Papercuts,” back in August. As for the rest of the record, Kelly hinted at a release date in the interview.

“I almost feel like the second you open your eyes and it’s 2022…you’ll have something to listen to,” he said.