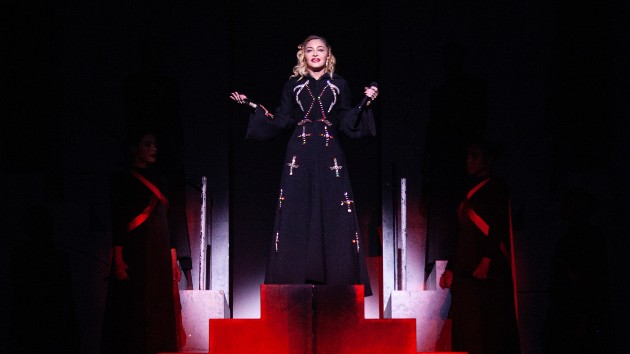 Madonna‘s Madame X concert film debuts on Paramount+ today and you’ll be able to watch it in style, thanks to some matching merch.

A new, limited edition merch collection has launched on Shop.Madonna.com to celebrate the film’s release. The collection features hoodies, tees and shorts emblazoned with logos and imagery representing her first-ever theater tour experience.

Prices range from $30 to $75, with more styles will be released soon. You can also find other tour merch in the online shop, including the infamous Madame X eye patch.

The Madame X concert film was shot in Lisbon, Portugal during the Queen of Pop’s sold-out tour, which ran from September of 2019 to March of 2020. It captures songs off her 2019 album of the same name, as well as previous hits and fan favorites.

The trek was different from Madonna’s previous tours. Instead of her usual stadium show, she created a much more intimate performance for theaters, and played multiple nights in major cities in the United States, England, France and Portugal.

Several shows on the tour were canceled due to a recurring knee injury Madonna suffered, and the entire tour was subsequently cut short due to the COVID-19 pandemic.

During an appearance on The Tonight Show starring Jimmy Fallon Thursday, Madonna revealed that the main thing she wants people to take away from the documentary is that art is important in our lives. “I don’t think people emphasize that enough,” she insisted.