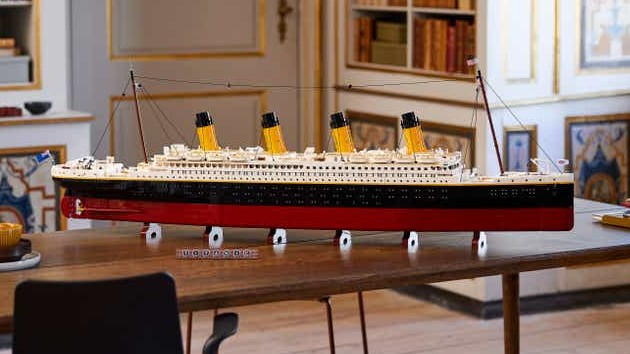 If you’re a LEGO fan, the Danish company has just dropped the gauntlet: a 9,090-piece, four-and-a-half-foot long, 1:200 scale model of the HMS Titanic.

Available in November, it’s the largest set the company has ever assembled, and for $630, you get your money’s worth.

The massive ship is hyper-detailed: once assembled, it can be separated into segments safely — not like that iceberg did — so that its inner workings, and Titanic‘s famous features like its grand staircase, can be revealed.

Once built, the ship splits into three parts, giving builders a cross-section view of the ship, including the various travel class compartments, Titanic‘s massive boiler room, and more. The model features working cargo cranes and piston-driven engines, as well as tensioners that tighten the lines between its massive masts.

Other features include lifeboats — gonna need those — as well as swimming pools, a working anchor, and a stand and nameplate to display in front of your magnum opus.

Not included, however, are any LEGO Minifigures of Jack and Rose from James Cameron‘s Titanic — or any figures, for that matter, as the scale of the traditional LEGO people wouldn’t sync with the size of the ship.