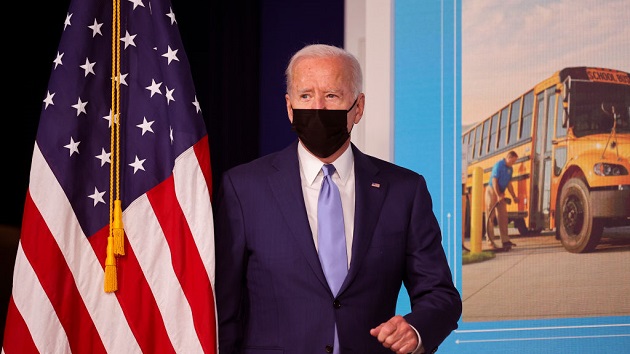 After a closed-door signing ceremony, Biden said in a statement that his administration is marshalling the U.S. government’s “full resources” to care for victims and “to get to the bottom of these incidents, including to determine the cause and who is responsible” — a mystery that has confounded U.S. officials for nearly five years now.

The HAVANA Act authorizes the CIA director and the secretary of state to provide affected employees with financial support for brain injuries under detailed criteria. It also requires both agencies to report to Congress on how those payments are being made and whether additional action is needed to aid victims.

Several affected personnel have complained privately, and in some cases publicly, that they have not been able to access proper medical care — in some cases questioning whether the U.S. government believes they are injured.

“For far too long, U.S. public servants and their loved ones who’ve suffered from directed energy attacks have been denied the care they need and deserve. That’s unacceptable,” said Sen. Jeanne Shaheen, D-N.H., one of the law’s co-authors who has advocated for victims for years. Its enactment will help “by removing barriers to critical medical attention and paving the way for personnel with brain injuries to recover,” she added.

American diplomats, spies and other officials have reported strange experiences and debilitating symptoms in several countries now. Symptoms include headaches, dizziness, cognitive difficulties, tinnitus, vertigo and trouble with seeing, hearing, or balancing. Many officials have suffered symptoms years after reporting an incident while some have been diagnosed with traumatic brain injuries.

In some cases, especially those first reported in Cuba in late 2016 and throughout 2017, U.S. officials described intense feelings of pressure or vibration and, at times, a screeching or chirping sound.

It’s unclear how many U.S. officials have confirmed medical symptoms, but new cases have been allegedly reported in several more countries in recent weeks, including India, Serbia and Germany. One reported incident in Vietnam delayed Vice President Kamala Harris’s trip there in August. Beyond more than 40 affected staffers in Cuba, the U.S. government has officially acknowledged reported incidents in China, Russia, Uzbekistan, Austria and the United States, although the White House said the vast majority have been reported overseas.

“Addressing these incidents has been a top priority for my Administration. We are bringing to bear the full resources of the U.S. Government to make available first-class medical care to those affected and to get to the bottom of these incidents, including to determine the cause and who is responsible,” Biden said in his statement Friday.

His National Security Council is leading a government-wide probe, while both the CIA and the State Department have their own internal task forces to coordinate their responses, too.

Many victims of “Havana syndrome,” which the U.S. government now refers to as “anomalous health incidents,” have struggled for years to get the health care they seek. Many others, including State Department officials who haven’t been affected, have been frustrated by the Trump and Biden administrations’ lack of information about reported cases — instead often learning about reported incidents in the press.

In his first note to all staff about the issue in August, Secretary of State Antony Blinken acknowledged the administration “can and will do a better job keeping you informed of our efforts to get answers, support those affected, and protect our people,” according to the note, obtained first by ABC News.

But the lack of information stems in part from how little the U.S. government knows about what was once referred to as “health attacks,” including what is causing them.

Last December, the National Academies of Sciences, Engineering, and Medicine issued a report that concluded that “directed, pulsed radio frequency energy appears to be the most plausible mechanism in explaining these cases, especially in individuals with the distinct early symptoms.”

CIA Director Bill Burns, who has met with his agency’s affected personnel and escalated efforts to solve this mystery, has boosted that finding as well — telling NPR in July there’s “certainly a very strong possibility” that some actor is behind the incidents.

But last week, the State Department declassified a secret 2018 report that cast doubt on that theory in some corners. Conducted by JASON, an independent scientific advisory group created during the Cold War to consult the U.S. government on defense science and technology, it concluded that radio or microwave energy could not produce the sound recorded by some U.S. diplomats in Cuba and their reported medical symptoms.

Instead, it said, the sounds were “mechanical or biological in origin, rather than electronic. The most likely source is the Indies short-tailed cricket, Anurogryllis celerinictus.”

But a senior administration official told BuzzFeed News, which filed a Freedom of Information Act request for the JASON report and first reported on it, that its findings are “not aligned with the Biden-Harris administration’s understanding of AHI (anomalous health incidents) and it has not informed our response.”

Either way, the report — written before incidents were reported in several other countries — determined that the sounds themselves were not injuring diplomats and could instead have been “introduced by an adversary as deception so as to mask an entirely unrelated mode of causing illness in diplomatic personnel.”