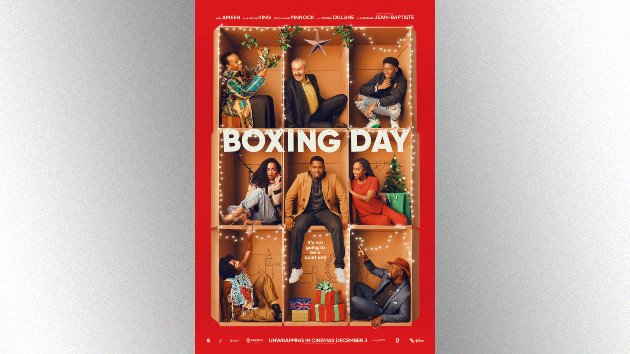 I May Destroy You star Aml Ameen has shared the first trailer to his directorial debut, Boxing Day.

The holiday romantic comedy, which is named after the British holiday celebrated after Christmas Day, was also co-written by and stars Ameen. It follows the actor as Melvin, a British author living in the U.S., who returns home to London for Christmas with his American fiancée, Lisa. After Melvin introduces Lisa to his eccentric British-Caribbean family, his relationship is put to the test. Aja Naomi King, Leigh-Anne Pinnock, Marianne Jean-Baptiste and Tamara Lawrance also star in the film. Boxing Day hits theaters in the U.K. and Ireland on December 3. A U.S. release has yet to be announced.

In other news, Melissa De Sousa and McKinley Freeman have landed recurring roles opposite Morris Chestnut and Yaya DaCosta on the new FOX drama series Our Kind of People, Deadline has learned. De Sousa will play accomplished financial reporter Alex Rivera, the ex-wife of Chestnut’s Raymond. Meanwhile, Freeman will play Nate, the father of DaCosta’s daughter, Nikki. As previously noted, the series follow DaCosta as Angela Vaughn, a single mother who moves her family to Martha’s Vineyard in hopes of growing her natural hair-care business and reclaiming her family’s name. Our Kind of People airs Tuesday night at 9 p.m. ET.

Finally, Sistas star K.J. Smith has landed a major recurring role on the Power prequel Power Book III: Raising Kanan. According to Deadline, Smith will play Palomar, one of Famous’ new neighbors, who’s often mistaken for her daughter’s older sister. A season-two release date for Raising Kanan has yet to be announced.