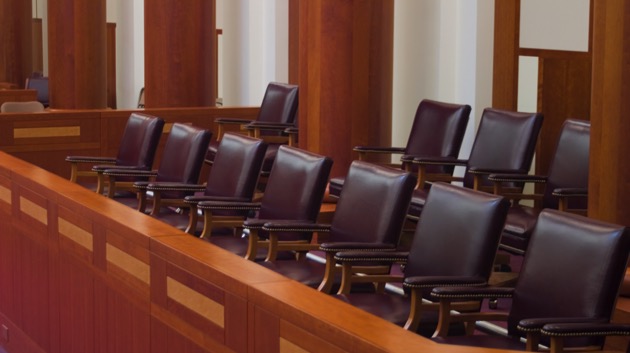 “I am a Buddhist, and so I practice for compassion, you know, for loving and forgiveness,” juror No. 4 told U.S. District Judge Edward Davila.

She told the court that she had become anxious anticipating how Holmes would be “punished by the government” if she were to find Holmes guilty.

“I keep thinking about this every day,” she added. She was excused per prosecution’s request; the defense did not object.

The alternate juror slated to replace juror No. 4, however, also expressed anxiety. “She’s so young,” the alternate told Davila, referring to Holmes.

“It’s my first time in this situation and it’s her future,” she said. “I don’t know if I’m 100% ready to participate in something like this.”

Davila elaborated on how the process would work, and how jurors would have no part in Holmes’ sentencing — adding that “punishment” should not be at all considered as the jury deliberates. Neither lawyers objected to her remaining on the jury, and the judge ruled she was fit to take juror No. 4’s place. She took the place of juror No. 4 Wednesday morning.

Now that juror No. 4 is excused, there are 15 jurors remaining: 12 active and three alternates.

Wednesday marked only the 12th day of Holmes’ trial — which was previously delayed multiple times due to the COVID-19 pandemic and Holmes’ pregnancy. Davila expects the trial will conclude in December, but the schedule is already delayed a day, due to a false alarm coronavirus scare amongst the jury in the trial’s first week.

Holmes founded Theranos in 2003 and claimed the company was developing blood testing technology that could perform hundreds of blood tests using only a few drops of blood. Holmes and former Theranos COO Ramesh “Sunny” Balwani, also Holmes’ ex-boyfriend, face a dozen charges of wire fraud and conspiracy to commit wire fraud in connection with what prosecutors call a multi-million-dollar scheme to defraud investors and patients.

Originally, the pair were to be tried together, but in December of 2019, the trials were severed due to allegations of abuse by Balwani against Holmes, which Balwani has denied.

Both this week and last, jurors heard from former Theranos lab director Dr. Adam Rosendorff, who claims he warned Holmes about Theranos device failings. He told the court he attempted to delay the company’s Walgreens launch, pleading with a “nervous” Holmes, who went forward nonetheless. In cross-examination, defense attorney Lance Wade attempted to discredit Rosendorff.