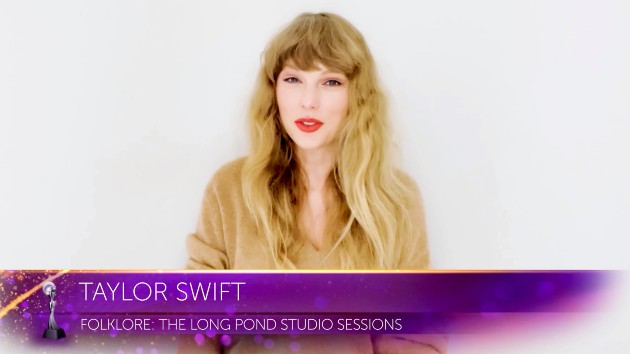 Taylor Swift thanked the fans — and her medical team — Tuesday night while accepting a Gracie Award, presented by the Alliance for Women in Media Foundation.

Taylor received the Gracies’ Grand Award for her Disney+ documentary folklore: the long pond studio sessions, which came out last November and featured Taylor performing every song on her folklore album with collaborators Jack Antonoff and Aaron Dessner.

Olympic gymnast Simone Biles presented Taylor with the award virtually. In her acceptance speech, Taylor responded by saying, “I wanted to say, first of all, thank you Simone Biles for presenting this award to me. I absolutely adore you and that just really made my heart skip a beat.”

“Making this film really was a new experience for me in so many ways — it was in the middle of the pandemic when this was really the first time that most of the people who worked on it had left our houses,” Taylor continued. “So I want to, first of all, say thank you so much to our medical team, our COVID team, who tested everyone and made sure that we knew that we were in a safe space to create music again.”

Of course, Taylor then thanked her loyal fans for “caring about all of this.”

“Thank you for being the reason why we why we could come together in this way,” she added. “You made this album into what it is and you continue to just blow me away all the time.”

Folklore, released in July 2020, went on to win the Grammy for Album of the Year.  Less than a month after the long pond studio sessions aired last year, Taylor surprised-released folklore‘s sister album, evermore.