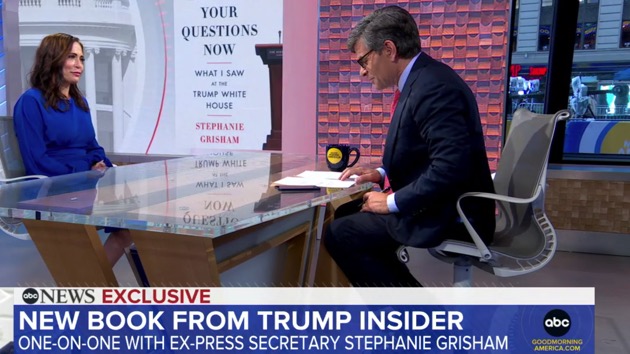 (NEW YORK) — In an exclusive interview with ABC News’ George Stephanopoulos, Stephanie Grisham, one of former President Donald Trump’s most senior and longest-serving advisers, said she regrets enabling a culture of dishonesty at the White House.

“You are talking about this cultural culture of casual dishonesty at the White House, so you were, as press secretary, even if you weren’t getting briefings, enabling that culture, weren’t you?” Stephanopoulos asked Grisham on Good Morning America Monday morning.

Grisham, whose new tell-all book “I’ll Take Your Questions Now” is out this week, responded, “Yes, I was. And I’ve reflected on that and I regret that. Especially now when watching him, and so many people, push the false election narrative. I now want to, in whatever way I can, educate the public about the behaviors within the White House because it does look like he’s going to try to run in 2024.”

Stephanopoulos challenged Grisham, who served nearly the entire four-year term in the Trump White House before resigning after the Jan. 6 insurrection at the Capitol, asking, “but you stayed until the final two weeks … what took you so long?”

“Yes, that’s a fair question and it’s a complicated question,” Grisham responded, adding that she was at first drawn to Trump’s ability to attract large crowds and his support among Republicans. But she said that when she joined the West Wing, she “started to see what it was really like and I regretted that decision immediately.”

The former president has forcefully responded to the latest tell-all book by a former close ally, with Melania Trump’s office saying in a statement, “The author is desperately trying to rehabilitate her tarnished reputation by manipulating and distorting the truth about Mrs. Trump. Ms. Grisham is a deceitful and troubled individual who doesn’t deserve anyone’s trust.”

Grisham, who also told Stephanopoulos it was the former president who told her not to hold briefings during her time in the role, said she is unsure if she could have done more to protect a young female staffer who she writes in her new book Trump had developed a “unusual interest” in and had “behaved inappropriately” toward.

“Should you have done more to protect her?” Stephanopoulos pressed.

Grisham responded, “I don’t know if I could have, there’s, there’s not an HR department at the White House,” before Stephanopoulos pushed back and suggested she could have brought the issue to White House chief of staff.

“How do you explain why the president was so placating of President Putin?” Stephanopoulos asked. Grisham said that, in her opinion, “I got the feeling that he wanted to impress dictators, I think he almost admired how tough they were.”

While other top aides resigned or were forced out, with some even speaking out against Trump while he was still in office, Grisham stood by the president throughout nearly the entirety of the Trump administration’s four-year term, through numerous controversies — and when asked on Monday by Stephanopoulos if it was a mistake to work for President Trump, she quickly replied, “Yes.”

“Why do it?” Stephanopoulos asked.

“I do believe he gave voice to a lot of people who did feel forgotten,” Grisham said. “But I think that many of us, myself included, got into that White House, and got heavy with power and … we didn’t think about serving the country anymore, it was about surviving.”