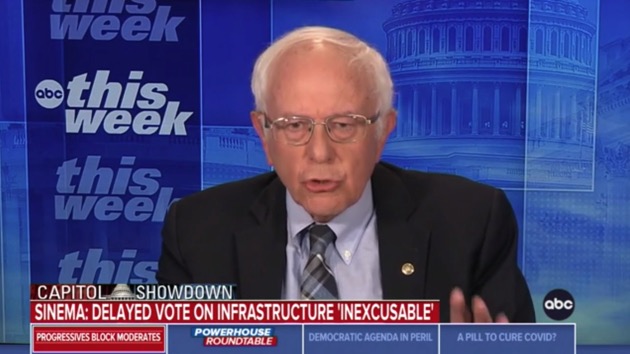 “Three and a half trillion should be a minimum, but I accept that there’s gonna have to be a give and take,” Sanders told ABC “This Week co-anchor Jonathan Karl.

“Both these bills are going forward in tandem,” Sanders said, reiterating the progressive call to hold out on passing infrastructure until the social spending bill is also passed.

Moderate Sens. Joe Manchin, D-W.Va., and Kyrsten Sinema, D-Ariz., have said they will not support the bill’s $3.5 trillion price tag. Due to the slim Democratic majority in the Senate, neither bill will pass unless they have all the votes of the Democrats.

Asked by Karl to respond to her statement, Sanders said he thinks Sinema is “wrong” and said both bills must go forward together, adding that he voted for the infrastructure bill.

“We’re not just taking on or dealing with Sen. Manchin and Sen. Sinema, we’re taking on the entire ruling class of the country,” Sanders responded. “Right now the drug companies, the health insurance companies, the fossil fuel industry are spending hundreds and hundreds of billions of dollars to prevent us from doing what the American people want.”

“This really is a test on whether democracy can work,” Sanders said. “I hope very much and I expect that the Democratic caucus and the president — I know he will — stand firm.”

Biden spent last week negotiating with members and visited Capitol Hill on Friday to meet with House Democrats. According to sources in the room for the meeting, the president suggested lowering the price tag for his social policy bill to a number ranging from $1.9 to $2.2 trillion to reach a compromise.

Sanders said he’s not sure it is “accurate” to say Biden would settle on a reconciliation package around $2 trillion.

“The president also said that a smaller investment could create historic achievements, but [for] you, $2 trillion is not enough?” Karl pressed.

“What the president is saying is that what we are trying to do is for the working families of this country, for the children, for the elderly, we’re trying to pass the most consequential piece of legislation since the Great Depression, and he’s right,” Sanders responded.

Sanders also said “no” when asked by Karl if a $2 trillion price tag for the larger bill would be enough.

Manchin has said he will not vote to go over $2 trillion on the reconciliation bill. Asked how they can proceed without his vote, Sanders said the bill is paid for by increasing taxes on “the wealthiest people not paying federal taxes.”

“If Manchin wants to pay for it, I’m there, let’s do it, and by the way, you could pay for it at $3.5 trillion, you can pay for it at $6 trillion,” Sanders said. “We have massive income and wealth inequality in this country.”

Democratic Virginia gubernatorial candidate Terry McAuliffe has called the $3.5 trillion price tag too high. Pressed on whether the Democratic infighting will not only hurt Democrats in the midterms, but also hurt McAuliffe in his November race, Sanders said he “wishes Terry McAuliffe the best of luck” and emphasized the popularity of the reconciliation bill.

“What we are fighting for is precisely what the American people want,” Sanders said.

Sanders emphasized his confidence in passing both bills.