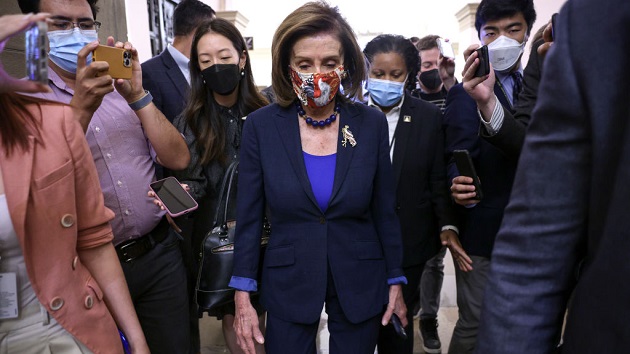 (WASHINGTON) — After failing to keep her promise on Thursday, House Speaker Nancy Pelosi told reporters Friday Democrats are “on a path” toward a vote on a bipartisan infrastructure bill as she arrived at the Capitol, despite progressives continuing to vow to vote “no” unless a deal on a larger spending package is reached.

The speaker suggested that talking to reporters later on would be more useful than during her arrival at the Capitol — an indication no progress was achieved overnight.

Pelosi and House Democrats held a caucus meeting Friday morning as they continue trying to find a path forward on their policy agenda after Democratic leadership and the White House failed to bring progressives and moderates together behind a path forward for President Joe Biden’s broader agenda.

The breakfast meeting gave leadership an opportunity to brief members on the status of the discussions with Senate moderates and the White House — and lawmakers a chance to address each other.

ABC News asked Pelosi on Friday whether she is trying to get members on board by promising a second reconciliation bill early next year in an effort to appease members now, after vowing again on Thursday that a reconciliation bill would follow the vote on the bipartisan package.

“I don’t know about that but a reconciliation bill is not excluded. It’s not necessarily connected to this,” she said.

House Majority Leader Steny Hoyer arrived a minute ahead of Pelosi, only telling reporters “we’ll see” when asked whether the House will vote on the measure before the end of the d

Pelosi has insisted for two mornings now that she plans to go ahead with a vote on the Senate-passed $1.2 trillion infrastructure bill — despite progressive Democrats vowing to defeat it.

Congressional Progressive Caucus Chair Pramila Jayapal, D-Wash., reiterated on Thursday progressives’ position that they’ll vote “no” unless there is agreement with the moderate Democratic senators on a larger social spending package to accompany it.

Sen. Joe Manchin, D-W. Va., who along with Sen. Kyrsten Sinema, D-Ariz., is not agreeing with Democrats on a larger bill, told reporters on Thursday he already conveyed to leadership his topline number is $1.5 trillion — far below progressives $3.5 trillion number, putting the House vote in even more jeopardy.

Biden, meanwhile, has remained largely out of the public eye this week as negotiations continue behind closed doors, other than stopping at the congressional baseball game to rub elbows with lawmakers.

“The President is grateful to Speaker Pelosi and Leader Schumer for their extraordinary leadership, and to Members from across the Democratic Caucus who have worked so hard the past few days to try to reach an agreement on how to proceed on the Infrastructure Bill and the Build Back Better plan,” White House press secretary Jen Psaki said in a statement Thursday night.

“A great deal of progress has been made this week, and we are closer to an agreement than ever. But we are not there yet, and so, we will need some additional time to finish the work, starting tomorrow morning first thing,” she said.

On Thursday, Pelosi left the Capitol just after midnight and told reporters that progressives and moderates were closer to reaching an agreement on the size of their social policy package than it appeared earlier in the week.

“We’re not trillions of dollars apart,” she said.

Asked about the vote that didn’t take place Thursday as she promised, Pelosi said, “There will be a vote today,” an apparent reference to the legislative calendar, by which, because the House was in recess, Friday was still considered to be “Thursday.”

Notably, Pelosi told ABC News’ George Stephanopoulos on “This Week” that she’s “never bringing a bill to the floor that doesn’t have the votes” — raising questions of whether she’ll be able to have a vote this week at all.

If Democratic leaders and the White House can reach an “agreement” or get Manchin and Sinema to accept a public commitment co-signed by Biden, that could be enough to meet progressive demands, and get their support for the delayed $1.2 trillion bipartisan infrastructure plan in the House.