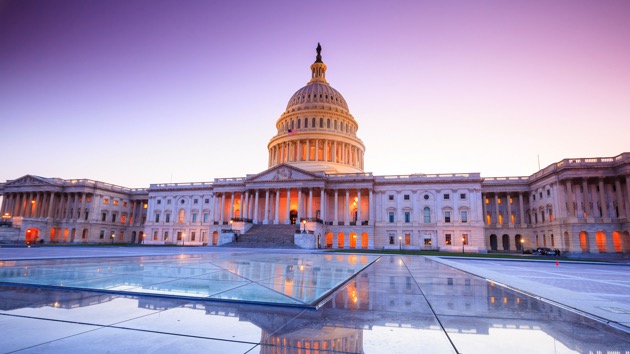 (WASHINGTON) — House Democrats scrapped plans on Thursday to vote on the Senate’s bipartisan infrastructure agreement after leadership and the White House failed to bring progressives and moderates together behind a path forward for President Joe Biden’s broader agenda.

“The President is grateful to Speaker Pelosi and Leader Schumer for their extraordinary leadership, and to Members from across the Democratic Caucus who have worked so hard the past few days to try to reach an agreement on how to proceed on the Infrastructure Bill and the Build Back Better plan,” White House press secretary Jen Psaki said in a statement Thursday night. “A great deal of progress has been made this week, and we are closer to an agreement than ever. But we are not there yet, and so, we will need some additional time to finish the work, starting tomorrow morning first thing.”

“While Democrats do have some differences, we share common goals of creating good union jobs, building a clean energy future, cutting taxes for working families and small businesses, helping to give those families breathing room on basic expenses — and doing it without adding to the deficit, by making those at the top pay their fair share,” Psaki added.

House Speaker Nancy Pelosi, D-Calif., left the Capitol just after midnight, and told Rachel Scott that progressives and moderates are closer to reaching an agreement on the size of their social policy package than it appeared earlier in the week.

Asked about the vote on the Senate-approved infrastructure bill that didn’t take place Thursday, Pelosi said, “There will be a vote today,” in what appeared to be a reference to the legislative calendar.

The decision to delay the vote came after Pelosi insisted Thursday morning that she planned to go ahead with a vote on the bipartisan infrastructure bill — despite progressive Democrats vowing to defeat it.

“We’re on a path to win. I don’t want to even consider any options other than that,” Pelosi told reporters at her weekly news conference. “We go in it to win it.”

Earlier, as she arrived on Capitol Hill, pressed by a reporter that the bill is facing “insurmountable opposition at the moment,” Pelosi responded that it’s “our plan” to bring the bill to vote Thursday, her self-imposed deadline.

“You cannot tire. You cannot concede. This is the fun part,” Pelosi said later at her news conference. “Our best interest is served by passing this bill today.”

Yet her comments suggested the House was in a holding pattern, with no firm decision on whether to hold or cancel the vote.

“We are proceeding in a very positive direction,” Pelosi said brightly, even though the bill has not been scheduled for the House floor and her top lieutenants have said publicly that it lacks the votes to pass.

Meanwhile, the White House wasn’t ruling out Biden heading to Capitol Hill Thursday to make a last-minute push to House Democrats just before the big vote.

While lawmakers were expected to agree separately on a government funding resolution with hours to spare Thursday, the outcome of the House vote on the $1.2 trillion bipartisan infrastructure bill — central to Biden’s agenda — was still in serious doubt.

Pelosi spent the afternoon meeting with various factions of her caucus. Even as progressives left the meeting vowing to withhold support for the infrastructure bill absent progress on Democrats’ larger agenda, two groups of moderates left meetings with Pelosi predicting a vote later Thursday evening.

Progressive Democrats have all but guaranteed that they will defeat the bipartisan bill on the floor — to the embarrassment of Pelosi who vowed to pass the bill this week — absent any breakthroughs on the larger policy spending package. Those breakthroughs seem unlikely as negotiations between the White House and Democratic Sens. Kyrsten Sinema and Joe Manchin, who oppose the package’s $3.5 trillion price tag, have fallen flat.

Roughly half of the nearly 100-member progressive caucus — at least 50 members, urged on by Sen. Bernie Sanders — have vowed to vote no on the bipartisan bill, effectively holding it hostage until a larger infrastructure bill passes via the reconciliation process.

While progressives bashed Manchin and Sinema over their objections to the larger package, Pelosi praised Manchin at her news conference, calling the West Virginia Democrat “a good member of Congress” and said negotiations are focused on “substance” rather than “rhetoric” or “dollars.”

At midday, Manchin told reporters his topline number for the larger bill — that he’s conveyed to Biden — is $1.5 trillion, something bound to harden progressive opposition and put the House vote in even more jeopardy.

Attempting to also sway progressives, Pelosi said Thursday members should “remove all doubt” that there will not be a reconciliation bill following a bipartisan vote on Thursday.

“We will have a reconciliation bill. That is for sure. today the question is about. We are proceeding in a very positive way to bring up the bill, to bring up the “BIF” (the bipartisan infrastructure bill), and to do so in a way that can win. And so far so good for today, it’s going in a positive direction,” she said.

Pelosi, who met with her leadership team ahead of news conference, hinted that getting a larger human infrastructure and climate policy bill is vital to her and her legacy.

“I just told members of my leadership that the reconciliation bill was a culmination of my service in Congress ’cause it was about the children,” she said.

But progressives appear to be holding firm in opposition.

Congressional Progressive Caucus Chair Pramila Jayapal, D-Wash., reiterated on Thursday that progressives are in the “same place” and will not vote to pass the bipartisan infrastructure bill unless there is agreement with the moderate Democratic senators on a larger social spending package.

“We will not be able to vote for the infrastructure bill until the reconciliation bill has passed,” Jayapal told reporters after a meeting with Pelosi.

She added, “We know that compromise is inevitable. We’ve also seen that play out over the last couple of days. And right now, we’re clearly in the thick of it.

Pelosi told ABC News’ George Stephanopoulos on “This Week” that she’s “never bringing a bill to the floor that doesn’t have the votes” — raising questions of whether she’ll stop the vote in the 11th hour.

Asked on Sunday by Stephanopoulos if she was confident that progressive members would vote yes, Pelosi answered, “Well, let me just say we’re going to pass the bill this week.”

Biden stepped out of the White House Wednesday night, rubbing elbows at the congressional game with his former colleagues, appearing to be in good spirits, amid the tense legislative negotiations, while Pelosi appeared to do some last-minute lobbying on her cell phone, in a show of the stakes of the infrastructure bill passing this week — as opposed to later.