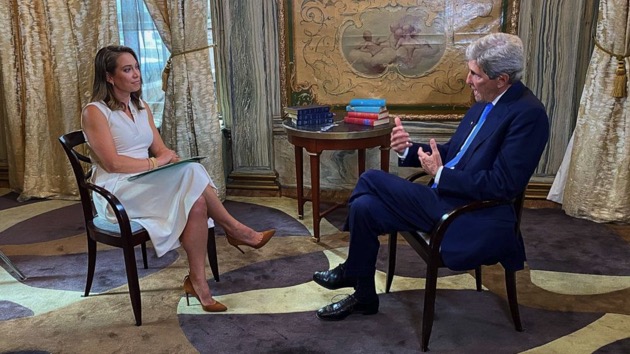 (WASHINGTON) — Top White House climate negotiator John Kerry said in an interview with ABC News Live that every country needs to act to reduce emissions and address climate change faster than ever before, especially after warnings the upcoming climate summit in November could be a failure if more countries don’t increase their commitments to the Paris Agreement.

Kerry said Mother Nature “did a hell of a job whipping up enthusiasm to get something done” after the extreme events and record-high temperatures around the world this past year and said leaders are starting to feel the anticipation for the upcoming COP26 summit where countries will re-examine what they need to do to limit global warming to 1.5 degrees or 2 degrees Celsius.

“Every country has to go faster. None of us can say we’re really fast,” Kerry, the special presidential envoy for climate, said in an interview with ABC News Live. “There are very few countries, you can get them on one or two hands, that are in keeping with the Paris numbers.”

The latest report from the United Nations found the world is on track to warm an average of 2.7 degrees Celsius by the end of the century, failing the goals of the Paris Agreement and triggering consequences from global warming like more extreme heat waves, droughts that would increase impacts on agriculture in some parts of the world and intensifying severe weather events. Even with every country’s current efforts to reduce greenhouse gas emissions, they’re expected to increase 16% by 2030, according to the U.N. report.

“The 191 countries that have all put in their plans together, whether they’ve changed them, improved them or kept them the same, that 191 result in a 16% increase in emissions,” Kerry told ABC News Chief Meteorologist Ginger Zee.

“That is a big F — that fails, it fails for everybody,” he added.

Kerry was appointed to the role as special envoy for climate by President Joe Biden to help re-establish the country’s role as a leader in international climate negotiations after former President Donald Trump withdrew the U.S. from the Paris Agreement.

Kerry, who previously served as secretary of state under President Barack Obama and for 28 years as a senator, has traveled to countries like India and China, which generates about a third of global greenhouse gas emissions, to speak with leaders about increasing their commitments to reducing the use of fossil fuels.

During the U.N. General Assembly, Chinese President Xi Jinping announced the country will stop financing new coal power projects abroad and will provide more financial support for developing countries to build renewable energy infrastructure. Kerry said that is a good start, but he acknowledged it sends a mixed message when the country continues to use fossil fuels and build new coal power plants inside the country.

“I think now there’s a growing awareness in China,” said Kerry, who recently returned from his second trip to speak with leaders there. “And I think President Xi is personally very invested in this issue. And my hope is that President Xi is going to help us all to come together around certain choices we can each make. It is possible that China could do more to peak earlier or to reduce coal.”

Kerry said he understands frustration from climate activists like Swedish teenager Greta Thunberg, who recently tweeted that “whatever our so-called leaders are doing, they’re doing it wrong.”

“A lot of them have failed, but I think it’s unfair. I think it’s a little much of a reach to say that, ‘so-called leaders,’ there are a lot of real leaders around and they are trying very, very hard to move this process,” he told ABC News.

Kerry said he understands Thunberg’s frustration and anger, and he is also angry that some people are getting in the way of action on climate change.

“What we need to do is behave like adults and get the job done. And she’s absolutely right to be pressing the urgency of our doing that. But there are leaders out there trying to get some things done, just too slowly in some cases, and we’ve got to speed it up,” he said.