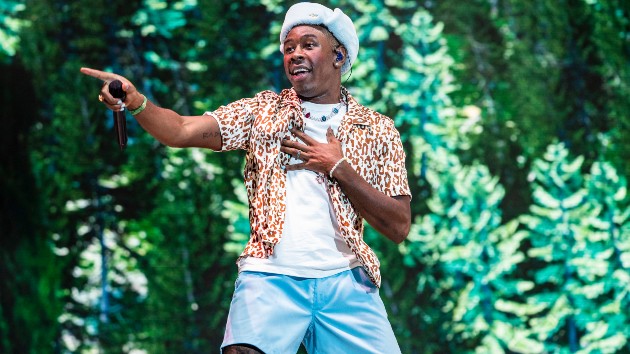 Kendrick Lamar emerged from his long hiatus to spit a verse on his cousin Baby Keem‘s “FamilyTies,” and Tyler, the Creator says it “ruined” him, because he saw a master who was not complacent.

Tyler has called the 13-time Grammy winner every two days to talk about his rhyme.

“You know why it ruined me? Because it’s someone at that level still gunning,” he tells XXL.com. “He’s trying new voices. He’s trying new s**t. He’s still learning. You can tell he was off his phone for a few months.”

The 30-year-old rapper says Lamar has inspired him to “just stay weird and stay tryin’.”

Another hip hop icon who has been a major influence is Jay-Z because of his spirit as a entrepreneur. He describes Hova as “one of the few who’s really listening and learned how to kind of run businesses since I was 17.”

Tyler reveals he’s also a big fan of Eminem, Lil Wayne, André 3000, Missy Elliott, Busta Rhymes, and Pharrell Williams. Wayne and Pharrell are featured on his sixth and latest album, Call Me If You Get Lost, which dropped in June. Now he’s planning a tour for next year to perform music from the album.

The Creator drives a “Green Goblin” Rolls-Royce Cullinan, and he reflects on how he’s become rich and famous after growing up poor.

‘I don’t come from money, they deny it/Since I don’t mirror the stereotypical products of my environment.’ he raps on the track “Massa” from his new album. “That’s why I’m so blessed and grateful to have this stuff,” he says, “’cause I don’t come from that.”