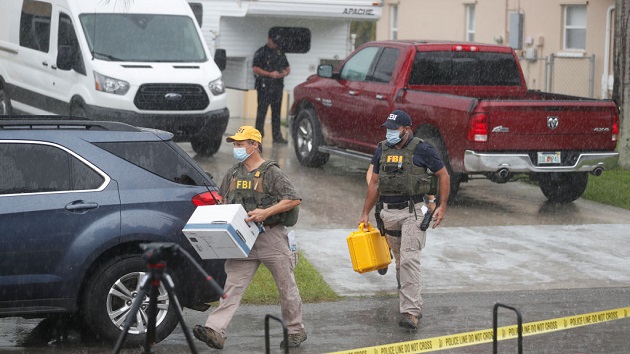 (NEW YORK) — The parents and stepparents of slain travel blogger Gabby Petito not only asked on Tuesday for the public to help authorities locate Brian Laundrie, who has been named a person of interest in their daughter’s homicide, but also assist in helping other families find their missing loved ones.

“I want to ask people to help all of the people that are missing and need help,” Petito’s father, Joe Petito, said during a news conference at the office of the family’s lawyer in Long Island, New York. “It’s on all of you, everyone in this room, to do that and if you don’t do that for other people who are missing, that’s a shame because it’s not just Gabby that deserves that.”

Joe Petito joined his wife, Tara Petito, Gabby’s mother, Nicole Schmidt, her husband, Jim Schmidt, at the news conference in showing tattoos they each got Monday night to honor their daughter.

The parents each had the words “Let it Be” tattooed on their right forearms like one their daughter had. They also had tattoos on their left arms of flowers and the word “Believe” they said their daughter designed.

“I wanted to have her with me all the time,” Nicole Schmidt said of why she got the tattoos. “I feel that this helps that.”

Nicole Schmidt said she has been deeply moved by letters and messages her family received from people worldwide, touched by her daughter’s zeal for life and travel, and heartbroken by her death.

“I just hope that people are inspired by her,” the mother said. “It’s hard to put into words, but it means a lot to me that she’s touched so many. I’m so proud for her and we’re going to keep that light going and help a lot of people if we can.”

Rich Stafford, a lawyer for the family, said the parents have complete faith in the FBI to achieve justice for their daughter. However, he said the FBI has asked the family to refrain from speaking publicly about Laundrie and their relationship with his family.

“Justice for Gabby is that we see justice for her homicide,” Stafford said.

He also had a message for Laundrie if he was listening.

“Brian, we’re asking you to turn yourself into the FBI or the nearest law enforcement agency,” Stafford said.

Stafford declined to answer questions concerning Laundrie’s parents. Law enforcement officials have said they were uncooperative in their search for Petito after her family reported her missing on Sept. 11.

The Laundrie family issued a statement Monday evening through their attorney reiterating they do not know of their son’s whereabouts.

“They are concerned about Brian and hope the FBI can locate him,” the statement reads.

In response to a question from ABC News on whether the parents are bothered that the FBI has yet to name Laundrie as a suspect in their daughter’s death, Stafford would only say, “The parents are 100% happy with the FBI. They’ve been with us at every single step of the way.”

“We want to make sure that no matter what, we do not impede their investigation in any way,” Schmidt said. “We wanted her home immediately but we understand their position and we know that she’s safe with them.”

On Sunday, hundreds of friends, family, and strangers, some from as far away as California and Florida, attended a funeral for the 22-year-old woman near the Long Island town where she was raised.

The parents also spoke of the Gabby Petito Foundation they have established to assist other families going through the turmoil of having a loved one missing.

“We can’t let her name be taken in vain. We need positive stuff,” said Joe Petito. “Anything we can do to bring that up and help people, that’s what we want.”