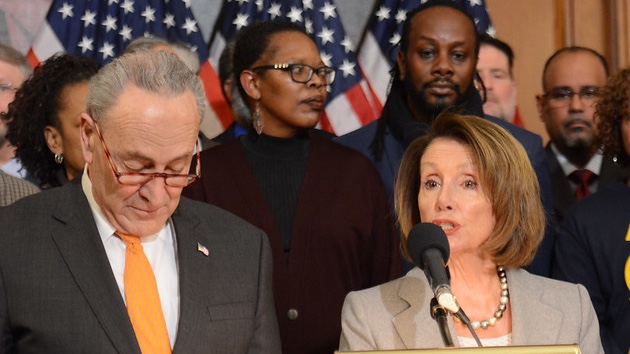 (WASHINGTON) — Democratic House and Senate leaders on Thursday announced they and the White House have reached agreement on a “framework” that will pay for most, if not all, of the massive $3.5 trillion human infrastructure bill — a move meant to mitigate concerns from moderate and centrist Democrats opposed to the hefty price tag.

But the leaders provided very little details on the framework a day after President Joe Biden met with Democratic leaders, moderates and progressives at the White House in an effort to save his agenda from Democratic infighting.House Speaker Nancy Pelosi also did not provide a clear outline about when the reconciliation bill will be ready for a vote.

She also did not commit to putting the bipartisan infrastructure bill on the floor for a vote next Monday, which she had promised moderates would happen.

Pelosi was joined by Senate Majority Leader Chuck Schumer and Treasury Secretary Janet Yellen at her weekly press conference, as Democrats also face a looming possible government shutdown on Oct. 1 and still need to deal with the debt ceiling, which Republicans will not support.

“The White House, the House and the Senate have reached agreement on a framework that will pay for any final negotiated agreement. So, the revenue side of this, we have an agreement on,” Schumer told reporters.

“We know that we can cover the provisions the president has put forward,” Pelosi added. “It’s all good.”

This announcement is meant to provide some relief to those moderate, centrist Democrats like Sens. Joe Manchin and Kyrsten Sinema, who do not support that $3.5 trillion number.

But Pelosi and Schumer provided very little on actual details. As of right now, leaders are no closer to having a reconciliation bill — which means the fate of the bipartisan infrastructure bill hangs in the balance.

“We came to terms as to a framework of an array of agreements that we have, depending on what the need is. Now at the same time, we’re finalizing on the outlay side, so if we need more, we need less — that will impact the choices we make there,” Pelosi said.

Pelosi also did not commit to putting the bipartisan infrastructure bill that has already passed in the Senate on the floor next week.

“We take it one day at time,” Pelosi told reporters. “I am confident that we will pass both bills.”

Pelosi also did not make clear if $3.5 trillion will remain the topline, or if that figure could change and drop lower.

“This is not about price tag. This is about what is in the bill,” Pelosi said.

Following the press conference, reporters caught up with Pelosi and pressed for more details on the framework.

When reporters suggested they had too few details, Pelosi responded, “well that’s your problem, not mine.”

Following the press conference, many senators close to the negotiation table say they are in the dark about the new framework agreement.

Senate Budget Committee Chairman Bernie Sanders said he has “no idea” what the agreement is. He told reporters he hopes to be briefed on it soon “if there is a framework.”

“We’ve been through this a million times. There are many many approaches as to how you can raise money in a fair and progressive way and raise at least 3.5 trillion dollars,” Sanders said. “If that’s what the menu is there is nothing then nothing particularly new I think.”

Sen. Mark Warner, a moderate Democrat on the Budget committee who has been intimately involved in negotiations with the president on the reconciliation plan told reporters he has not the “foggiest idea” what is in the framework.

Warner told reporters he was “as interested in getting those details as you are.”

Senate Finance Committee Chair Ron Wyden, D-Ore., said he was in meetings over the framework, but declined to give many details about what was discussed or decided upon.

“It went right to the heart of what we need in terms of tax fairness in America and that’s where we are this morning,” Wyden said while dodging questions about a topline or any agreed to “payfors.”

Senators said they expected to receive more information from leadership Thursday on what the framework is.

Democratic leaders also have to contend with a potential shutdown on Oct. 1, but Pelosi insisted a shutdown would be avoided.

Pelosi told reporters Republicans could cave on raising the debt ceiling because “public sentiment is everything.”

But she indicated that both chambers will do everything they can to keep the government open via a so-called “continuing resolution” that maintains current funding levels, which may mean they will have to deal with the debt ceiling at a later time.

“We will keep the government open by September 30 … and continue the conversation about the debt ceiling. Whatever it is, we will have a CR that passes both houses by September 30,” Pelosi said.