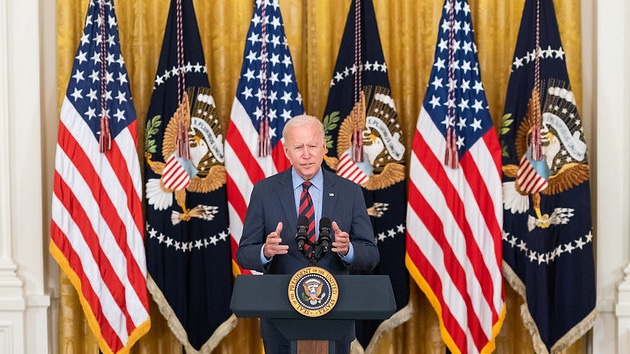 (WASHINGTON) — President Joe Biden for the first time admitted the diplomatic fallout with France over a recent defense deal could have been better handled, the White House said Wednesday in a joint statement with French President Emmanuel Macron’s office.

Biden and Macron spoke on the phone Wednesday, in a bid to smooth over the diplomatic fallout from a defense partnership the U.S. struck with Australia and the United Kingdom.

“The two leaders agreed that the situation would have benefitted from open consultations among allies on matters of strategic interest to France and our European partners,” the statement from the White House and Élysée Palace said. “President Biden conveyed his ongoing commitment in that regard.”

The reconciliatory note could signal that France may tone down its criticism of Biden after he agreed to share nuclear submarine technology with Australia.

France’s leaders have compared Biden to his predecessor, President Donald Trump, saying the U.S. surprised France, a key ally, with the agreement — which resulted in Australia scuttling a major deal that had been underway with France.

Biden and Macron plan to meet in Europe in October, according to the statement. Biden is set to head to Glasgow, Scotland, that month for a summit on the climate crisis, although the two sides did not say where the leaders planned to meet.

Meanwhile, Macron will return the French ambassador to Washington next week — France had recalled him in response to the defense news — and the ambassador will who will “then start intensive work with senior U.S, officials,” the statement reads.

The two leaders “have decided to open a process of in-depth consultations, aimed at creating the conditions for ensuring confidence and proposing concrete measures toward common objectives,” the White House and Élysée Palace said. “They will meet in Europe at the end of October to reach shared understandings and maintain momentum in this process.”

The statement also said Biden “reaffirms the strategic importance of French and European engagement in the Indo-Pacific region.”