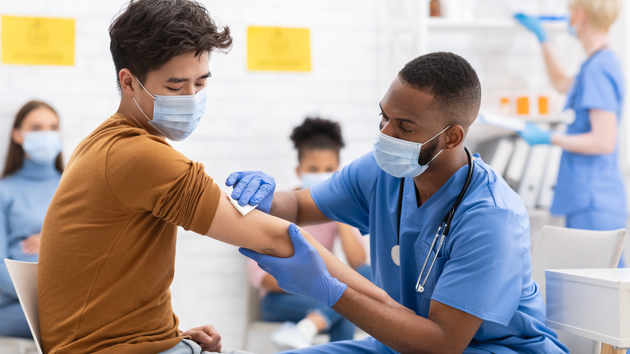 (LOS ANGELES) — Karen Notzon’s daughter, Callie, began her first year of middle school this fall by opting out of in-person learning after initially deciding to return to the classroom.

The Huntington Beach, California, mother told ABC News there were many reasons why her daughter changed her decision — including the rising number of COVID-19 cases across the U.S. linked to the delta variant — but one of the biggest ones was that a particular circumstance left Callie ineligible for vaccination in time for classes.

The pre-teen turns 12 in November, and is not eligible for the Pfizer COVID-19 vaccine like some of her other classmates who had birthdays before her this year, Notzon said.

Many students like Callie, who are entering sixth or seventh grade this year, are anxiously waiting to get their shots.

While medical experts say there is little that can be done for those soon-to-be 12-year-olds until the vaccines are approved for younger people, they say there are some tips that schools and families can take to ensure that each child is safe this year.

Annette Anderson, the deputy director for the Johns Hopkins Center for Safe and Healthy Schools, told ABC News that middle and high schools are dealing with a tough time going back to classes as there are scores of students who haven’t received their COVID-19 vaccines. As of Sept. 13, 52% of Americans between 12 and 15 have received at least one dose of a coronavirus vaccine, according to the U.S. Centers for Disease Control and Prevention.

Anderson, a former public school administrator and parent of a teenager, said the situation is very frustrating for those waiting for their child to age into the eligibility threshold, and could be harmful to students’ emotional and mental wellbeing.

“This is a tough time for schools. We’ve never been in a situation like this,” she said. “You are building the plane as you’re flying it.”

Notzon said she is more comfortable keeping Callie at home until she is fully vaccinated for that very reason and because they have an elderly member of the family living in the house.

“We’ve had high anxiety putting our daughter in a position like that. It seems like a risk,” she said.

Dr. Jessica Justman, an associate professor of medicine in at the Columbia University’s Mailman School of Public Health, told ABC News that parents with children on the cusp of vaccine eligibility that choose in-person classes will have a better chance of staying safe if the school sticks to strict measures, especially with masking.

Until more students receive their shots, indoor masking is the only line of defense from catching the virus, she said.

“It won’t be perfect, but whatever amount of time they spend wearing a mask is more time protected,” Justman said.

Katie Berkaw of Austin, Texas, told ABC News that her family is taking those same precautions seriously for her son, Connor, who turns 12 in October.

Although the hospitalizations and COVID-19 cases in Texas have been skyrocketing over the last few weeks, Berkaw said her family ultimately decided that it was best for her to attend classes in person during that wait.

“Being back on campus is important for his social engagement,” she said.

In the meantime, Connor has been wearing a mask, as is required by his school district, washing his hands and avoiding big indoor events until he gets his shot, according to Berkaw.

“There is always a little bit of nervousness that he could get it,” she said. “But he understands the level of cleanliness that is needed for himself.”

Sharon Gucker, a single mom from Nassau County, New York, told ABC News that her 11-year-old son, Owen, has also been cautious at school, wearing a mask and avoiding big crowds, but he is near the end of the tunnel.

The seventh-grader, who is the youngest of Gucker’s three sons, turns 12 this Saturday and has already scheduled an appointment to get his vaccine at a New York state vaccination center, she said.

This has been a moment the entire family has been waiting for, as they’ve been putting off many big activities due to the wait, including visiting family members on the West Coast.

“We’re still going to still wear our masks, but I think after that we will feel like a great weight off our shoulders,” Gucker said.

Justman and the other experts said practicing patience is the best things parents with kids who turn 12 later in the school year can do.

While it is certainly a question of when the vaccines will be made eligible for people under 12 and not if, Justman said parents can have some relief knowing that their seventh- or sixth-grader is in a classroom with some classmates who have some protection against the virus.

“You can look at this from a glass half full perspective,” she said. “It’s more fortunate for these 11-year-olds to be in a classroom with so many people who are vaccinated.”

Anyone who needs help scheduling a free vaccine appointment can log onto vaccines.gov.