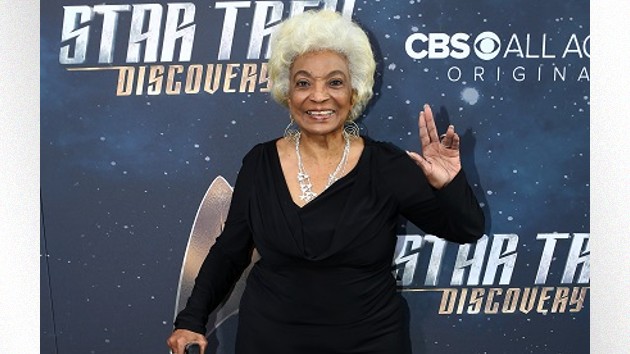 Nichelle Nichols, one of the original cast members of Star Trek, has passed away at age 89, according to a Facebook post by her son, Kyle Johnson.

“I regret to inform you that a great light in the firmament no longer shines for us as it has for so many years,” he began. “Last night, my mother, Nichelle Nichols, succumbed to natural causes and passed away.”

He added, “Her light however, like the ancient galaxies now being seen for the first time, will remain for us and future generations to enjoy, learn from, and draw inspiration. Hers was a life well lived and as such a model for us all.”

Nichols also used her celebrity to shed light on the civil rights struggle in the ’60s.

In fact, it was Martin Luther King Jr. who convinced Nichols not to leave Star Trek at the height of the civil rights movement. In an interview with StarTrek.com, Nichols explained that during a chance encounter at a fundraiser, King urged her to remain on the show rather than leaving for Broadway.

“When we see you, we see ourselves. And we see ourselves as intelligent, and beautiful and proud,” she recalled King telling her. The following Monday she rescinded her resignation to show creator Gene Roddenberry.

In 2016, she spoke to ABC Audio about how she lent her star status to NASA decades later to encourage diversity in its ranks of real-life space travelers.

“NASA recruited me, hired me to recruit women and minorities for the space shuttle program. And until that time there were no people of color even considered,” she explains, adding with a laugh, “And after that, we were all over the place!”

“I interviewed quite a few young women that were interested in that and simply didn’t think they had a chance. And one interview with me and they knew they did.”

Through her years, Nichelle attended countless fan signings at Trek conventions and found many people you might not expect — from King to former President Barack Obama — were Trekkers.

She with a laugh of meeting said fans, “I’m used to it. And I’m not used to it.”