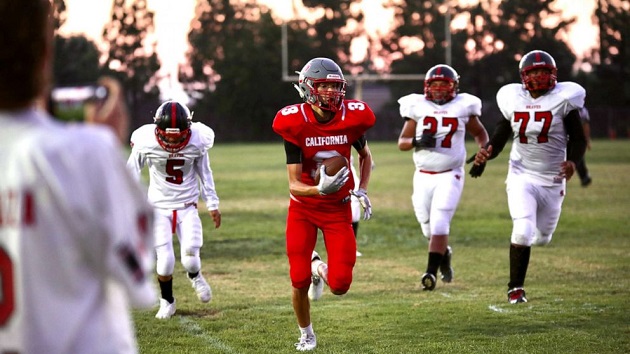 (RIVERSIDE, Calif.) — Once considered underdogs, the football team at the California School for the Deaf in Riverside has defied the odds with an undefeated season that has electrified and inspired spectators in California and beyond.

The Cubs Varsity football team was 11 and 0 this season and now has won the division championship game, which is a first in the school’s 68-year history.

“It’s inspiring for the deaf community quite honestly. 11 and 0 we’ve never experienced this being this far in playoffs,” coach Keith Adams told ABC News. “The community is so excited, the morale has been uplifted, the self-esteem of our players — you can see a major difference.”

Wide receiver Jory Valencia told ABC News that the notion that they’ve never had a successful season only “fired us up” and inspired them to push harder each game.

“Now we’re just destroying every game. We’re showing the world we can play. We’re not losing anymore,” he said.

The players and coaches rely on American Sign Language to communicate and spoke with ABC News through an ASL translator.

Running back Enos Zornoza said that their success this season is due to their perseverance and hard work during each practice.

He said that they’ve had their eyes on the championship from the beginning, but they took it “one game at a time, one practice at a time.”

“Other players like to fool around, they’re like, come on, guys. Stay committed. Stay on task. So I think that it just takes teamwork,” wide receiver and quarterback Phillip Castaneda told ABC News, reflecting on the historic season.

Castaneda added that he and his teammates have “amazing chemistry,” which gives them the energy they need to win on the field.

Adams said his players are so talented that they have made coaching “easy” for him.

“I knew we were going to have a good team, but they have just amazed me — exceeded my expectations.”

Asked what he hopes the Cubs’ story of triumph will teach others, Zornoza said he hopes the attention they are getting nationwide will inspire other deaf kids and give them hope.

“We’re breaking news that we can do it right. And not just our school here but other schools for the deaf can do it as well.”

Now the team is getting ready to head to state. “We are not done, one more game, we are looking for that ring. One more game,” Adams said.