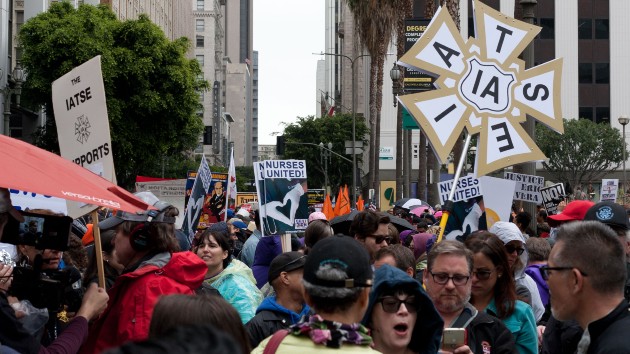 With representatives from the massive Hollywood union the International Alliance of Theatrical Stage Employees (IATSE) and those from the Alliance of Motion Picture and Television Producers still at the bargaining table, things are tense in Tinseltown.

The showbiz union, representing tens of thousands of behind-the-scenes workers, says its workers will gp on strike Monday, hitting the picket lines at 12:01 a.m. Pacific time if the union’s needs aren’t met.

The strike would spell a massive shutdown of countless productions in Hollywood and elsewhere.

Last week, IATSE’s membershiip authorized its first nationwide strike in its 128-year history, but both sides continue to negotiate.

“Assume there will be a strike and hope there isn’t,” Deadline says a representative told members of one of the IATSE’s groups, Local 800, at a virtual town hall Thursday.

Another source told the trade the odds are “about 50-50” whether the union will strike or not, “but that could change quickly either way…”

IATSE’s “most grievous problems” with producers and studios include: “excessively unsafe and harmful working hours; unlivable wages for the lowest paid crafts; consistent failure to provide reasonable rest during meal breaks, between workdays, and on weekends,” and its assertion that, “workers on certain ‘new media’ streaming projects get paid less, even on productions with budgets that rival or exceed those of traditionally released blockbusters.”