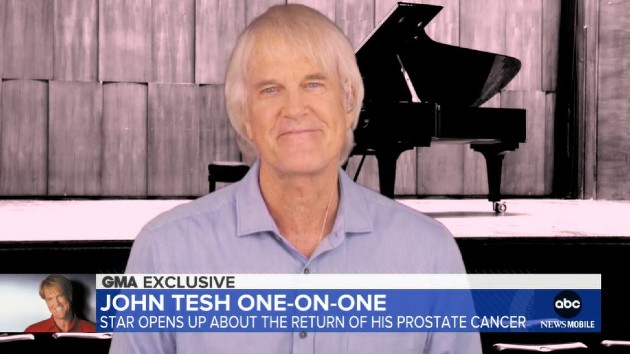 John Tesh is on the mend after his prostate cancer returned for a second time.

Speaking with Good Morning America on Wednesday, Tesh, who is 69, said he knew something was wrong when he began to feel a strange pain in October 2020.

“All of a sudden, I started feeling some really serious pain in my pelvis,” the former Entertainment Tonight co-host recalled, noting that he first ignored it because he thought he had pulled a groin muscle.  “Then it got worse and worse… I couldn’t sleep.”

Tesh booked an appointment with his doctor and, after undergoing a scan, discovered “the cancer had returned with a vengeance.  The scans showed that there were tumors wrapped around my pelvis and one of [the tumors] was strangling my right kidney.  So, it got serious really quickly.”

The Grammy-nominated musician was first diagnosed with a rare and aggressive form of prostate cancer in 2015.  He revealed that the doctor told him his cancer was terminal and, in order to cope, he turned to alcohol and prescription drugs.

He credits his wife of 30 years, ﻿Connie﻿ Sellecca, for pulling him out of that dark place over five years ago by “giving me an ultimatum… to get straightened out.”

Tesh explained that overcoming that low point in his life helped him become battle ready when cancer knocked on his door a second time.

Now, he says he is “feeling great” and credits his wife and his faith for helping him ride out the storm.