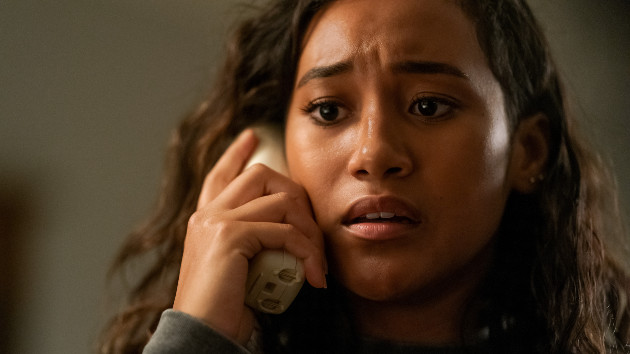 Sydney Park says she knows exactly why her latest project, There’s Someone in Your House, is more than your cliché slasher film.

“Well, first of all, I really love that Makani isn’t your average scream queen,” Brooks tells ABC Audio of her lead role. “She is Asian and Black. She hails from Hawaii.”

Based on Stephanie Perkins‘ 2017 novel of the same name, There’s Someone in Your House follows Park as Makani, a recently transferred high school student stalked by a killer intent on exposing her and her classmates. Park says Makani is far from a one-dimensional figure.

“It’s really cool that she is this internal character and we sense that there is some instability, or some inkling of, like, a tragic past,” she shares. “And she’s struggling with that. So that really drew me in.”

In fact, Park’s character is so mysterious at times that the actress says she even began to question Makani’s true intentions.

“[W]hile I was reading the script, I kept on thinking about all of these different possibilities,” she says. “Like, is Makani the one who’s doing all of this? What’s really going on?”

It’s that unpredictability  — along with plenty of high school angst — that makes Park believe that this slasher film is “sort of like [a] John Hughes horror film.”

“I love the mystery and… the emotional rollercoaster of it all,” she says. “It’s very unique and we bend a lot of genres.”